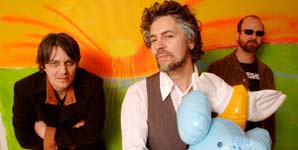 Making of the video

"The Yeah Yeah Yeah Song" - will be the first track from The Flaming Lips' new album 'At War With The Mystics" released through Warner Music, it is available at all digital retailers.

Steven had been recording in a separate vocal booth on his computer and I walked by and heard the crazy grouped vocals doing the "yeah yeah yeah" part and I was immediately hooked. This is one of those songs that points the finger at the pettiness of those in power but also points the finger back at ourselves - what would YOU do? Power in the hands of the inexperienced (which is what we would be) is very dangerous...

The Lips will shoot a video for "The Yeah Yeah Yeah Song" in Los Angeles at the end of the month with director/collective Traktor (Basement Jaxx's "Where's Your Head At?" Madonna's "Die Another Day"). Much like everything his band does, Coyne says he's looking forward to the opportunity to get weird and wonderful.

This is the follow up album to the very well recieved, Yoshimi Battles the Pink Robots released back in 2002.

Check out the great dylan-esque advert too.

The Flaming Lips Christmas At The...