The 'Twilight' actor was spotted in the audience with friend Katy Perry.

Robert Pattinson headed to the desert on Saturday night, to support his rumoured fiancée FKA Twigs as she made her Coachella debut. The Twilight star was spotted in the audience enjoying his girlfriend’s set along with friends including singer Katy Perry. 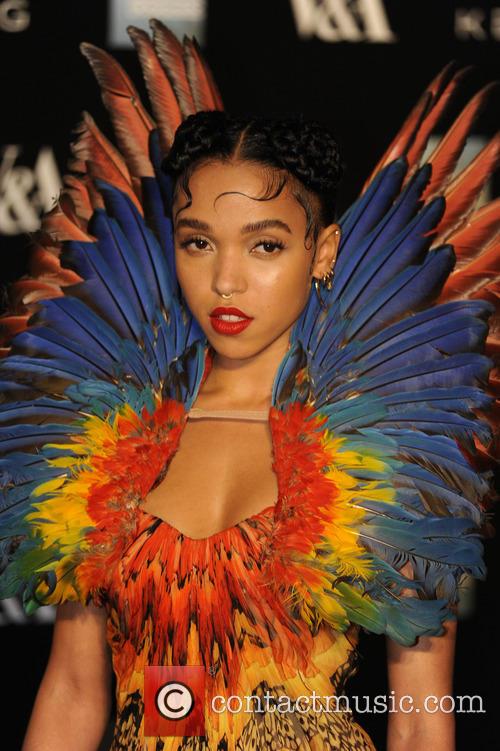 FKA Twigs has been dating the Twilight actor since last summer.

Although he tried to blend in with the crowd, fans and media in attendance couldn’t help but spot Robert proudly watching his girlfriend on Saturday evening. The Twilight star was dressed down for the occasion, wearing one of his trademark beanie hats with a light grey t-shirt and blue jeans.

R-Patz's pal Katy Perry was also seen enjoying Twigs' set, but the ‘Teenage Dream’ singer was a little easier to spot in her pink and blue crop top and skirt combo. Twigs was making her debut at the California festival, performing in the Gobi tent at 9.35pm.

The 27 year old singer mesmerised the crowd with her sultry singing and dance moves, while wearing a white flowing dress with gold embellishments. The rising r'n'b star's set included hits such as ‘Pendulum’ and new single ‘Glass & Patron’.

Billboard reports that midway through her set Twigs shared a story about how she'd performed a show in the Indio area last year around the same time as the festival was taking place. "When I tried to [get in to the festival], they said I wasn't allowed in," she told the audience.

According to People, Twigs and Pattinson later hit up Jeremy Scott and Moschino's party, where guests are said to have enjoyed DeLeón Tequila cocktails and got a closer look at the new Polaris Slingshot motorcycle.

More: FKA Twigs: Relationship With Robert Pattinson Is "Worth It" Despite Negative Attention

Pattinson and Twigs (real name Tahliah Barnet) were rumoured to have become engaged two weeks ago, after rapper T-Pain told Vulture magazine that the singer may not contribute to his new album because "she's engaged now."

T-Pain later said his comments were an April Fools prank, however People confirmed the engagement with a source telling the mag, "He wants to marry her.They are inseparable when they are together. They live at his house." Neither Pattinson nor Twigs have spoken out about the engagement rumours.