British Singer FKA Twigs Refused To Get Angry At T-Pain After The Hip-hop Star Appeared To Leak The News Of Her Secret Engagement To Actor Robert Pattinson Earlier This Year (15), Insisting She's A "Pretty Chill Person". 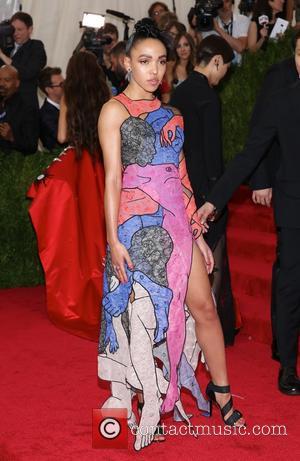 Picture: FKA Twigs - A variety of stars turned out in style for the MET Gala 2015 and the opening of 'China: Through The Looking Glass'...

The rapper recently left Vulture Magazine reporter Dee Lockett stunned when he told her Twigs had secretly accepted the Twilight star's proposal, and she sparked a media frenzy by running his comments on April Fools' Day (01Apr15).

In the article, T-Pain confessed he was struggling to secure studio time with the Video Girl singer, stating, "We met in the studio. Her music's changed a lot since then. But she's on tour so much, and anytime I call her, she's in a different place. And she's engaged now, so that's about to be a whole other thing... to ol' Patty (Pattinson). I don't know if she wanted anybody to know that..."

T-Pain tried to backtrack hours after the story was published by insisting he was playing an April Fools' prank on the media, but the engagement rumours have continued to swirl and last month (May15), Pattinson and Twigs made their official debut as a couple by hitting the red carpet at New York City's Met Gala, where the musician was photographed wearing a sparkling diamond on her left ring finger.

Now, in a new interview with Complex magazine, Twigs suggests the engagement is for real after the reporter broaches the subject of T-Pain leaking the personal news to the press.

When quizzed about how she felt about the situation, the private star replies, "I'd rather not talk about it."

The writer, who notes the singer appeared to be "genuinely sad" discussing the controversy, then asks if she has confronted T-Pain over his actions, to which she replies, "Umm... It's fine, I'm a pretty chill person, do you know what I mean?"

The singer was more forthcoming about the racist messages she has received online from some of Pattinson's jealous fans, admitting, "It is pretty horrible", before reasoning, "But ultimately, I'm in an amazing relationship. So it doesn't matter."