FKA Twigs and Robert Pattinson are reportedly keen to have children after recently getting engaged. 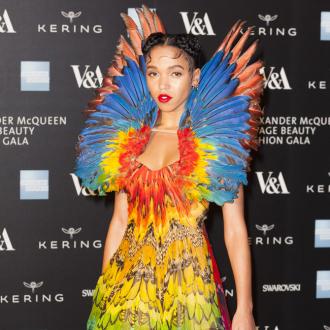 The 'Two Weeks' hitmaker is reportedly desperate to have kids with her rumoured fiancé.

The couple recently got engaged and are said to be considering having a relaxed wedding as FKA twigs ''wants something quite informal, like a pub wedding''.

However, Robert's parents - Richard and Clare Pattinson - ''would really like a church wedding''.

And an insider claims Robert is ''much more calm and happy'' since finding love with the 27-year-old singer, whose real name is Tahliah Debrett Barnett.

The pair's engagement appeared to be confirmed by rapper T-Pain, who said the singer was too busy to join him in the recording studio because of her upcoming nuptials.

Asked if FKA twigs would be featuring on his upcoming album, he said: ''Well, the first time we even met each other, we met in the studio. Her music's changed a lot since then. But she's on tour so much, and anytime I call her, she's in a different place. And she's engaged now, so that's about to be a whole other thing.''

When questioned further, he added: ''Yeah, to ol' Patty [Robert Pattinson]. I don't know if she wanted anybody to know that...''