First Serve - Must B The Music Video

De La Soul's Plug 1 and Plug 2 are First Serve and they will release their debut single, Must B The Music on March 26th, 2012 via PIAS Recordings. Their eponymous album will be released on April 2nd, 2012.

The video for Must B The Music sees Plug 1 and Plug 2 living in an animated world. It follows a day in their life as they wake up in their Parisian home and wind up at the 'Goon Time' building, where they subsequently get signed.

Plug 1 and Plug 2 are the aliases of De La Soul's Pos and Dave, respectively. De La Soul formed in 1987 and has gone on to inspire other artists such as The Black Eyed Peas and Camp Lo. De La Soul's debut album, 3 Feet High and Rising, was their biggest selling album, as well as a critical and commercial success.

In recent years, De La Soul have collaborated with virtual band Gorillaz; they featured on the 2005 single Feel Good, Inc., which they won a Grammy for Best Pop Vocal Collaboration. They worked with the band again, appearing on the track Superfast Jellyfish on Gorillaz' third studio album Plastic Beach. 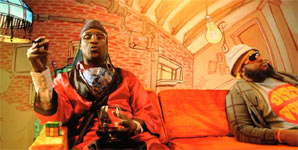 First Serve - Must B The Music Video