Reese Witherspoon gives a beautifully stripped-back performance in this epic journey based on the memoir by Cheryl Strayed. The title has a double meaning, as it follows this wild child through the Wild West in a quest to find her centre. This metaphor is as obvious as Cheryl's badly over-loaded backpack, but while the messages are unmistakable the filmmaking and acting are raw and natural. And the settings are spectacular. 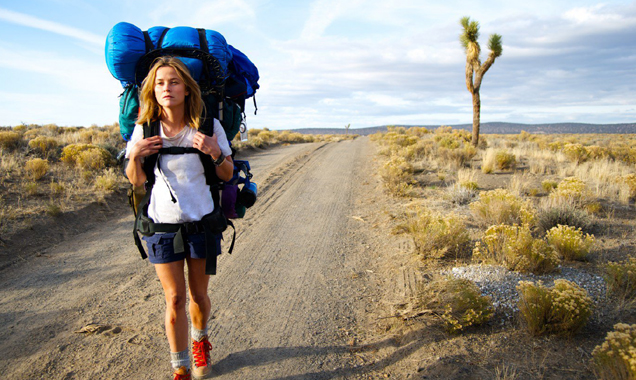 After a chaotic patch of wanton living, seen in flashback, Cheryl (Witherspoon) sets off to hike a thousand miles along the Pacific Crest Trail, from Mexico to Canada. She has no idea what she's doing, but bravely goes for it, overcoming feelings of loneliness before getting to know some fellow hikers along the trail as she traverses deserts, mountains and forests amid sunshine, rain and snow. All of this gives her a chance to make sense of a variety of memories involving her mother (Laura Dern), her ex-husband (Thomas Sadoski), her younger brother (Keene McRae) and her best friend (Gaby Hoffmann). And there are plenty of issues that need to be sorted out.

The film is structured in a way that lets us learn about Cheryl's past gradually. Important facts and events are dribbled in throughout the hike, shaping Cheryl's physical odyssey into a journey of self-discovery, which is more than a little gimmicky. Especially when "telling" quotes are printed right across the screen. Thankfully, Nick Hornby's script and Jean-Marc Vallee's direction never moralise about her history of promiscuity and drug abuse. These things are not the problem: they are symptoms of what's wrong with Cheryl. And this gives the film a maturity lacking in most Hollywood-studio films that are happy to find easy explanations and solutions.

Witherspoon also helps by giving Strayed a remarkable inner energy. The actress may be 38, while Strayed was 27 when she made the trek, but Witherspoon's girlish charm, racy humour and hot temper make Cheryl come to life in a way that's fascinating to watch. Her interaction with the people she meets, both friends and potential foes, is thoroughly engaging. And while the film never quite lets us discover her mental processes (it's too busy telling us what they are), it's still a sometimes startlingly moving exploration of the power of grief and the fact that all of our experiences, good and bad, are an important part of who we are. But most important is the idea that there's nothing we can do to make ourselves more valuable to society. We're valuable already, wherever we are.