Under the Shadow Review

While the horror genre in Hollywood seems to be trapped in a tired found footage loop, filmmakers from further-flung places are reinventing the genre with clever twists on the old formula. With this horror thriller, Iranian filmmaker Babak Anvari not only chills the audience to the bone, but he also makes some cleverly pointed comments on the world we live in. It's rare to find a movie that so adeptly frightens us while also giving us something to think about. 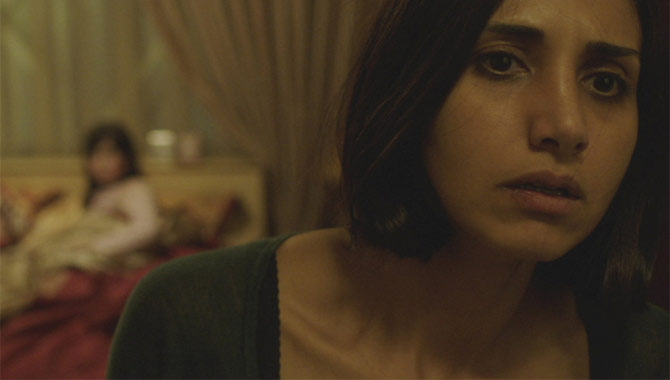 It's set in Tehran during the 1980s Iran-Iraq war. As Iraqi bombs begin to fall on the city, Shideh (Narges Rashidi) is horrified that her doctor husband Iraj (Bobby Naderi) is sent off to the front, leaving her alone in their apartment with their young daughter Dorsa (Avin Manshadi). But Dorsa has been listening to her babysitter's stories about evil djinn, and she's far more terrified of these demonic creatures than she is of the bombs. Shideh tries to assure Dorsa that there's nothing lurking in the shadows, but after an unexploded bomb lands in a neighbour's flat, strange things start happening in the building. And Shideh begins to wonder if Dorsa might be on to something.

The film is shot with serious skill, capturing scenes with both realism and a sense of artistry that reveals both details of life in 1980s Tehran and much more universal things that all viewers can identify with. Shideh is a young professional whose career has been derailed by some activism in her past. Insults come both overtly and in subtle comments from people she knows. And it's understandable that an independent woman wouldn't want to run home to her parents for help. Rashidi plays her with earthy realism, adding humour and steely tenacity to her growing anxiety. Alongside her, Manshadi is superb as the young Dorsa, realistically annoyed that her mother refuses to listen to her warnings.

Where all of this goes is increasingly intense. It may start with Shideh wondering what happened to her beloved bootleg Jane Fonda videotape, but it grabs hold and doesn't let up as this already stressed-out woman is pushed further toward the brink. Writer-director Anvari brilliantly twists the standard horror movie cliches, layering every scene with deeper meaning that makes it that much more involving. The film offers striking insight into Iranian society, especially the strict morality-based system that hangs like an oppressive shadow over the nation. But more than that, this is quite simply one of the scariest movies we've seen in years.