While the subject matter of this small British drama lends itself to controversy, it's handled with bracing honesty by filmmaker Higgins and his gifted young cast. As a result, we travel this unusual journey with the characters, experiencing something rather outrageous along with them. 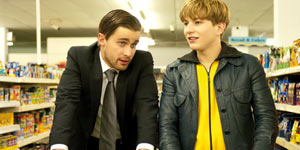 Set in Newcastle, it's the story of 16-year-old twins Kristen and Owen (Clark and McEntire), who take care of their disabled mum (Hill) and struggle to pay the bills. They cope with their situation by plotting elaborately witty escape scenarios, and then whey meet the charismatic young loan shark Liam (Cooke), both Kristen and Owen fall for him.

While leading Kristen on, Liam actually latches on to Owen, but has one condition if they are together: Owen has to dress up as a girl and let Liam call him Kristen. Dazzled by Liam's charm, Owen goes along with it until he begins to suspect that Liam might not be very stable. Cooke is superb as the likeably cool Liam, subtly oozing a slippery, predatory sexuality that Owen wouldn't be able to spot. Cooke also lets Liam's bravado slip now and then, revealing his inner fragility, which makes him startlingly sympathetic. Not only are both twins drawn to him, but we are too. And both Clark and McEntire deliver transparent performances that get under the skin.

McEntire proves that he's a talent to watch by diving into the role without hesitation, then letting us see Owen's intelligence fighting with his lust and fear. Along the way, there are a series of scenes that add to the growing tension, including a visit to Liam's seemingly oblivious parents and a climactic seaside trip to a B&B honeymoon suite. Writer-director Higgins keeps us on edge by continually twisting scenes in directions we don't expect.

As the characters grapple with power, sexuality, gender and desire, the film overlays the drama with a growing sense of horror as we worry that Owen won't be able to escape from Liam's control. And it's so intensely natural and internalised that the film leaves us shaken in the end. And also exhilarated.