It's rare to see a film in which writers, director and cast all respect the intelligence of their audience. So when it happens, it's something to savour.

Especially when it shows as much audacious skill as this British thriller does. 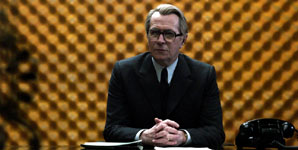 In the Cold War paranoia of 1973, there's a Russian mole in British intelligence. And the top boss Control (Hurt) has narrowed it down to four top colleagues (Firth, Jones, Hinds and Dencik). He asks faithful George Smiley (Oldman) to root out the spy, so he and Peter (Cumberbatch) begin a complex investigation that involves a discredited agent (Hardy) and a murdered operative (Strong). But the truth only seems to get more elusive the further they descend into the rabbit hole.

John LeCarre's story is a tightly woven knot that takes patience to unravel.

And Alfredson shoots each scene with a vivid sense of subtext, catching tiny details that might tell us something important, or maybe not. Meanwhile, O'Connor and Straughan's minimalist script teases us with secrets and innuendo, hinting at liaisons and treachery while quietly putting the pieces into the puzzle.

And it all hinges on Oldman's staggering stillness as Smiley. He only has a few scenes that involve major dialog, so we learn everything about him from tiny bits of business, flickers of his eyes and, most tellingly, his outrageous silence in the face of even the most shocking confrontation. And the cast around him is stellar, with special notice to Hardy, Firth, Cumberbatch and Strong, who like Oldman manage to show us glimpses of the man far beneath the surface.

No, there aren't many women in this film. Besides Burke's lively, sharp-tongued colleague, only Svetlana Khabenskiy's tormented Russian moll registers. It's a story about a boys' club in which one of the trusted inner circle is betraying everyone else. And Alfredson masterfully uses Hoyte Van Hoytema's smokey-foggy photography and Alberto Iglesias' swirling score to both evoke the period and keep us on our toes. Yes, it's slow, deliberate and brainy, but it's also one of the most exhilarating films of the year.