When Penn & Teller turn their hand to documentary filmmaking, we know it's going to be something playful. Indeed, this is a hugely entertaining film, gripping us with a fascinating story that has a lot to say about the interplay between art and technology. It's also a witty exploration of one of history's most iconic painters. 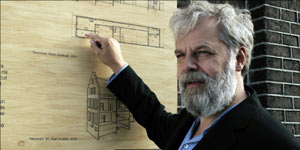 Tim Jenison is a successful inventor in Austin, Texas. A nerd with too much money and time on his hands, he becomes fascinated with the 17th century Dutch painter Johannes Vermeer, whose paintings have an uncanny photographic quality to them. Experts like David Hockney have long wondered how Vermeer achieved this realism, suggesting that optic lenses were probably involved. So Tim sets out to find the secret, developing a lens and a set of mirrors to recreate one of Vermeer's most complex paintings, The Music Lesson. And even though he has no artistic skill, his result may change art history forever.

It also forces us to reconsider how we define artistry, because clearly technology is another tool an artist uses. Penn & Teller hold our interest by peeling away the layers and letting us see Vermeer's magic (they also hint that the film itself might be a trick). The fact is that Vermeer created photorealistic images 150 years before the advent of photography, and no one has previously been able to explain how he did it. But whatever process he used also proves his artistic skills, simply because it involves so much creative thinking.

And this is the journey we watch Tim go through. He's a terrific screen character, a likeable guy whose curiosity drives him to visit Vermeer's hometown and learn glazing so he can grind his own lens. He even tries to get into Buckingham Palace, where the original painting hangs. Penn & Teller find hilarious asides all the way along, tracing Tim's 11-year project to crack Vermeer's secret, and specifically the 130 days recreating The Music Lesson. This is essential viewing for anyone who wonders about the line between technical objectivity and artistic subjectivity. Tim claims to have no artistic talent at all, but his passion proves otherwise.