For his directing debut, actor Auteuil remakes Marcel Pagnol's 1940 classic into a twisty, involving romance. It's thoroughly engaging all the way through, leaving us with a surge of emotion we rarely get at the cinema. 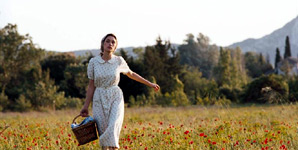 The film is shot with a lovely attention to detail and an unrushed pace that carries us lightly into the story using gentle humour and a vivid sense of the characters. When Patricia is lured to Jacques' private room, we sharply feel her fear about violating the rules of propriety, even as we never think that Jacques is up to anything nasty. When she finally gets up the courage to tell her father what has happened, the scene is heart-wrenching.

The piquant dialog is beautifully written, while the themes of clashing classes and family reputation quietly build in intensity. So much of the story takes place in between the lines that the film holds us tightly in its grip. As things progress, and pride and tradition rear their ugly heads, the story takes turns that are both harsh and gorgeously tender. This allows the Auteuil to develop lovely layers of complexity that move us deeply.

A rich mix of characters and a timeless story make this film hugely entertaining as well, with strong waves of emotion and brittle humour and moments in which we hold our breath wondering which way things might go. This is a film about people trying to navigate a tricky situation with honour and honesty, and the point where fundamentally decent people clash on principles that they have no control over. It also reminds us that sometimes the route to doing the right thing is extremely difficult to navigate.