Over the past couple of years British filmmakers have found all kinds of ways to breathe new life into the documentary format, from Clio Barnard merging life and art in The Arbor to Carol Morley's darkly disturbing Dreams of a Life. Now Bart Layton joins them with this mixture of documentary, mystery and thriller, which recounts an astonishing true story that gets more outrageous with each revelation. 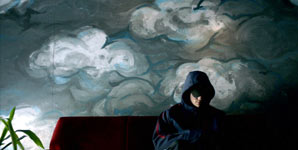 At the centre is 23-year-old Bourdin, a French-Algerian who, when arrested by police in Spain, claimed to be Nick Barclay, a 16-year-old American who had been missing for three and a half years. Despite speaking with a French accent and having the wrong colour eyes, Nick's sister Carey confirmed his identity and took him home to live with Nick's mother Beverly in Texas, where he attended Nick's high school. Even a sceptical FBI agent (Fisher) believed his story of kidnapping, rape and torture, although a private detective (Parker) spotted something that wasn't quite right.

With lush, intimate camerawork, the filmmaker interviewed everyone involved, then interspersed their stories among dramatic re-creations of the scenes, which play out in an almost dreamlike style from the perspective of whoever is talking. So when we hear another point of view, we suddenly see some new detail that changes the story completely. At the centre is Bourdin's cheeky running commentary, which reflects his enjoyment of his own audacity as well as the terror when he realises that he's in way above his head.

Watching the mystery close in around him is absolutely riveting, especially as he senses that he might be in real danger. In many ways he's a fantasist along the lines of Leonardo DiCaprio in Catch Me If You Can or Jim Carrey in I Love You Phillip Morris. And the people around him are just as vividly unforgettable as movie characters. Especially Parker, a colourful Texan who should really have his own TV series.