The Flowers of War

The Flowers of War Review

This true story is so outrageous that we'd never believe it as a fictional tale. Especially since its big themes make it almost mythical. Yet while it's gorgeously produced on an epic scale, it also gets rather melodramatic and maudlin in the final act. 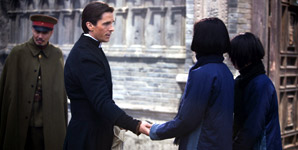 American mortician John (Bale) crosses 1937 Nanking as the Japanese finish their brutal invasion. He arrives at the cathedral, but the priest's body has been vaporised by a bomb so there's nothing for him to do. Hiding in the church are a group of orphaned pre-teen girls and one altar boy (Huang), who beg him to help them. Then a group of prostitutes arrive looking for refuge.

Reluctantly, he agrees to help them all hide from the marauding Japanese soldiers. And even more reluctantly, he starts looking for a way out.

Told from the perspective of one of the young girls (Zhang Xinyi), the story centres on the banter between John and one of the prostitutes (Ni Ni).

Relations between these two groups of young women aren't exactly smooth, and John does nothing to make anything easier. Thankfully both writer Heng and director Zhang refuse simplify the interaction. Less textured is the way Chinese soldiers are depicted as selfless heroes while the Japanese are all vicious rapists.

This is perhaps not so exaggerated, but it unbalances the movie. So when scenes turn weepy and the characters have unthinkable encounters with Japanese soldiers, the film starts to feel like emotionally manipulative propaganda.

This isn't to undermine the skill of the actors at creating balanced characters, as they are all engaging and intriguing. And Zhang's direction is artful and subtly clever.

But this approach makes us feel like the story itself, especially with its astounding final-act twist, is a legend rather than a literal account. Not that something so moving couldn't have happened, but filmmakers make it mythical, which of course undermines its ability to trigger the wrenching response they so clearly want us to have. In China, audiences who grew up with this history will no doubt be deeply stirred. Everywhere else, this film holds the attention with its riveting narrative, but leaves us doubting that it actually happened quite this way.