Anchored by a fierce double performance from Dominic Cooper, this true story is so intensely violent that it's not easy to watch. But it's an extremely well-made film, and the tight point of view makes it both riveting and urgent. 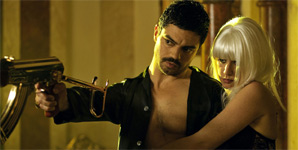 Tamahori directs the film with an intense sense of energy that never lets up.

We are thrown right into this nightmare alongside Latif, and the film focuses tightly on his first-hand reports of life in a horrific situation. At times, Tamahori seems to cross the line to convey Uday's well-documented sadism, and the more extreme scenes are overwhelmingly gruesome. But by anchoring the story in Latif's viewpoint, we have something to keep us engaged. And to maintain a sense of perspective.

Cooper's two performances are simply jaw-dropping, adding texture to both roles that continually takes us aback. With the exception of a few deliberate moments, it's always clear which character is which, thanks to Uday's whiny voice and whirling physicality and Latif's more thoughtful, dubious eyes.

Cooper is simply electric on screen, especially when these complex men are engaged with each other. By contrast, Sagnier seems like a cipher, a woman we can't really trust because we never quite see her.

And while it's clear what the script is trying to say, Cooper and Tamahori continually throw in wrinkles that undermine the more obvious dialog and plotting. As a result, it's more like Scarface than Green Zone. And continual referencing to real events keeps it grounded, even with the excessive mayhem and shocking grisliness. In the end it's the bravery of both Cooper and the real Latif that lingers in our minds.