As with Sideways and About Schmidt, Payne finds clever ways to blend sharp comedy and warm drama to create a seriously involving and entertaining film.

And Clooney has never had a role that was quite as emotionally resonant as this. 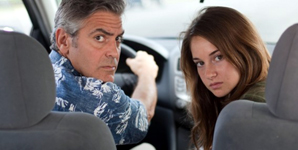 In sunny Hawaii, Matt (Clooney) has coasted through marriage and parenthood, focussing on his career and managing the estate of his family, which is descended from Hawaiian royalty. But now his wife (Patti Hastie) is in a coma, and he has to take responsibility for his free-spirited daughters, 10-year-old Scottie (Miller) and 17-year-old Alexandra (Woodley). Meanwhile, his cousins want to sell off a gorgeous tract of ancestral land in Kauai. Amid all of this, Matt finds out that his wife isn't going to wake up, and also that she had been having an affair.

The film is narrated with Matt's internal monolog, as his relaxed but efficient approach to life is both reflected in and challenged by his grief and anger. So it doesn't seem surprising when he decides to find the other man (Lillard) and invite him along with family and friends to say goodbye to his wife before she dies. And what makes this film unmissable is the way each scene cracks the surface in realistic and telling ways, which of course allows the entire cast to shine.

Clooney shows a softer side of himself that we haven't seen since ER as Matt tries to juggle real-life responsibilities that feel like a distraction from his conflicted emotional response to his wife's accident. And there are especially strong supporting turns from Lillard, Forster (as Matt's father-in-law) and Greer, plus breakout roles for the talented Woodley and newcomer Krause, whose scene-stealing role as Alexandra's surfer-dude sidekick deepens into something surprising.

Payne lets the events play out gently, and the humane script beautifully grounds the strong emotions in earthy comedy. This is a film about the complexity of relationships and the waves of joy and pain that life throws at us, often at the same time. There are so many contradictory feelings among these characters that watching their attempts to make the best of a messy situation is both hilarious and deeply moving.