An unapologetically silly movie that manages to hit the right notes, this free-wheeling comedy makes up for its corny premise with sharp writing and acting. And as it keeps the audience laughing, it's also quietly finding some rather intriguing things to say about masculinity in American society. Thankfully, preaching a message is never this film's intention. And both Kevin Hart and Josh Gad bring so much charm and energy to their roles that they instantly become a movie duo we'd like to see together again and again. 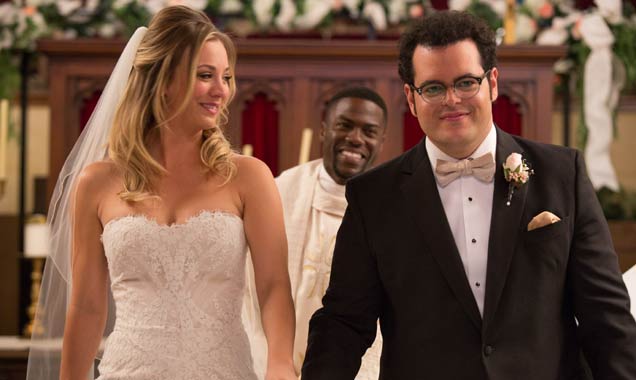 Gad plays Doug, the nervous groom preparing for his wedding to Gretchen (Kaley Cuoco-Sweeting), a girl far hotter than he ever imagined he'd get for a wife. But Doug has no friends who are willing to be his best man and groomsmen, so he turns to his wedding planner (Serricchio) for help getting in touch with an underground service that provides them. Enter Jimmy (Hart), the fast-talking, quick-thinking best man for hire who assembles a hilariously rag-tag group of "friends" as groomsmen. As they indulge in some condensed bonding so they can convince everyone they're best pals, these guys actually begin to have fun together. And Doug begins to hope that maybe this isn't just a professional partnership.

Yes, what we have here is a bromance between Doug and Jimmy, two friendless guys who discover that maybe together they can change their lives. Filmmaker Jeremy Garelick never tries to obscure the standard rom-com structure, and the simple plot is utterly predictable, but there are surprising currents of comedy and emotion running everywhere. Hart and Gad manage to bring out all kinds of riotous humour, underlying insecurities and general comic mayhem in each scene. Hart's cocky run-on dialogue is hilarious, and matched perfectly by Gad's gung-ho physicality. But even more intriguing are the darker layers beneath the silly surface. And everything is livened up by a raucously ridiculous supporting cast, including veterans Ken Howard and Mimi Rogers as Gretchen's too-intense parents and an underused Cloris Leachman as her bedraggled granny.

As evidenced by Leachman's gags, not every joke hits its mark. But the humour is so quick-paced that we don't have to wait long until we're laughing again. And the screenplay's looseness works in its favour, peppering scenes with unexpected set-ups and punchlines and random characters who obscure the narrative's formulaic structure. This also makes it a rare comedy in which each of the characters seems to have a full life off-screen. We actually want to know more about all of these goofballs.