While it's great to see M. Night Shyamalan return to the twisty horror genre, his use of found-footage leaves the film feeling like a decent premise with nowhere to go. Presented as a documentary made by a teenager, the movie is relentlessly uninteresting, only watchable because of a few mild jolts and a blackly comical freakishness. Otherwise, the characters are too thinly drawn, and the story too gimmicky.

It opens as a single mother (Kathryn Hahn) reconnects with her parents on Facebook after 15 years estrangement. Instead of going home to see them herself, she books a holiday with her new boyfriend and sends her teen kids, cynical Becca (Olivia DeJonge) and clownish Tyler (Ed Oxenbould), to stay with Nana and Pop-pop (Deanna Dunagan and Peter McRobbie). But as Becca and Tyler videotape the experience, they begin to worry about their grandparents' sanity. Maybe it's just old age, or perhaps they are "sundowners", pensioners who go a bit mad at nighttime. And as things get progressively bizarre, both of them begin to worry that perhaps there's something locked in the basement that Nana and Pop-pop don't want them to see.

Everything on-screen is shot on cameras supposedly wielded by Becca and Tyler, although several scenes are implausible or frankly impossible. Shyamalan does a nice job creating a creepy vibe, then throws things suddenly into the frame to make the audience jump. But there isn't a single moment of proper suspense, mainly because it's all played for laughs: as if senile old people are hilarious. Until they become menacing, of course. Shyamalan pushes this idea with a very heavy hand, attempting to manipulate the audience's response by slowly dribbling out revelations that aren't particularly clever or surprising. And through it all, there's the nagging sense that nothing about the script holds water, starting with a mother's willingness to send her kids on their own to stay with parents she has avoided for a decade and a half.

This is indicative of the general lack of realistic depth in the characters. Performances aren't bad at all, and at least Dunagan and McRobbie are clearly having a lot of fun with their twitchy, nutty roles. But DeJonge's Becca is an insufferably pretentious cineaste, while Oxenbould's Tyler is an obnoxious goofball who thinks he's a great rapper (he isn't). Both are so unlikeable that it's very difficult for the audience to care what happens to them. Only Hahn finds any texture in her role, and most of her performance is on a Skype chat screen. Which basically shows why the found-footage genre should be retired until someone comes up with a fresh use for it.

Watch the trailer for The Visit here: 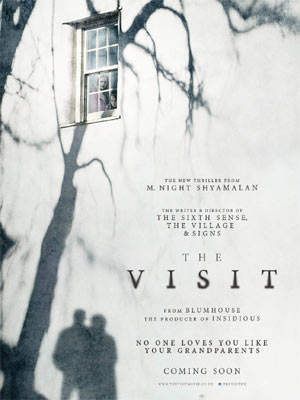