The Theory of Everything

The Theory of Everything Review

An unusual point of view prevents this from ever turning into the standard biopic, but it's Eddie Redmayne's staggeringly committed performance as Stephen Hawking that makes the film unmissable. Based on the book by Stephen's wife Jane Hawking, the film uses her perspective to recount the events with their relationship firmly at the centre, which adds a personal angle the audience can engage with. This diverts the attention from Hawking's scientific breakthroughs, but makes the film both energetic and emotionally riveting. 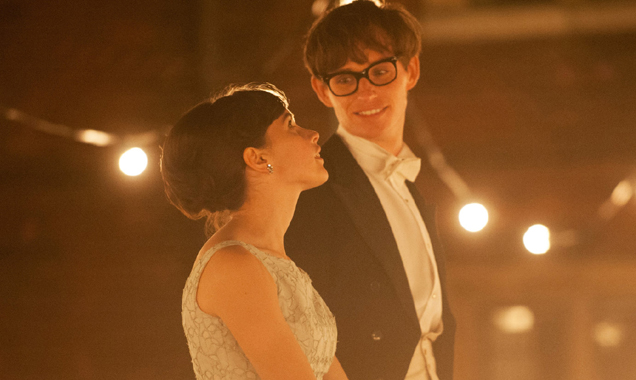 It opens in 1963 when Stephen (Redmayne) is a rising-star at Cambridge, already a genius who thinks far outside the box. But he also has a sharp sense of humour, which makes it easy to see what Jane (Felicity Jones) sees in this brainy black-hole-obsessed geek. Then just as their relationship begins to get serious, he is diagnosed with motor neurone disease and given two years to live. Instead of giving up, Jane marries him and has three kids as Stephen defies the doctor's prognosis. As his physical condition deteriorates, they get help from two people who become unexpectedly close: widowed choir director Jonathan (Charlie Cox) and medical assistant Elaine (Maxine Peake). And even as their marriage comes apart under the pressure, Jane and Stephen remain deeply connected to each other.

Anthony McCarten's script cleverly lets big ideas swirl around each scene without swamping the more human story. The central factor in Stephen and Jane's interaction centres on faith: his in science, hers in God. Stephen continues to seek a theory that will scientifically explain the nature of existence, while Jane catches him out when he takes a leap of faith himself. And the film lets all of this play out through their interaction with a variety of terrific side characters, including Stephen's tutor (David Thewlis), his colleagues (Harry Lloyd and Enzo Cilenti), his father (Simon McBurney) and Jane's mother (Emily Watson). Each performance is packed with telling nuance, while Jones gives the film a textured heart and soul.

But the show belongs to Redmayne, who cleverly maintains a vivid sense of Stephen's witty personality even as his body collapses into itself. It's an astonishing thing to watch, as Redmayne never loses the essence of the character simply because he never plays Stephen as a noble saint. For his part, director James Marsh refuses to sentimentalise anything, showing Stephen's remarkable thirst for knowledge without ever turning him into a movie hero. These are regular people dealing with extraordinary circumstances in a powerfully positive way that makes us want to find that attitude within ourselves.

The Theory of Everything Trailer