The Tale of the Princess Kaguya

The Tale of the Princess Kaguya Review

Like The Wind Rises, this Oscar-nominated Studio Ghibli animation is a proper cinematic epic, telling a sprawling story with artistry, invention and vivid characters that leave most Hollywood animated movies in the dust. It's based on a 10th century Japanese folktale that's packed with resonant themes, and it's been animated in a way that makes it look like a childhood storybook come to life. So even if it feels rather long at 2 hours 17 minutes, the visual minimalism is relentlessly beautiful. 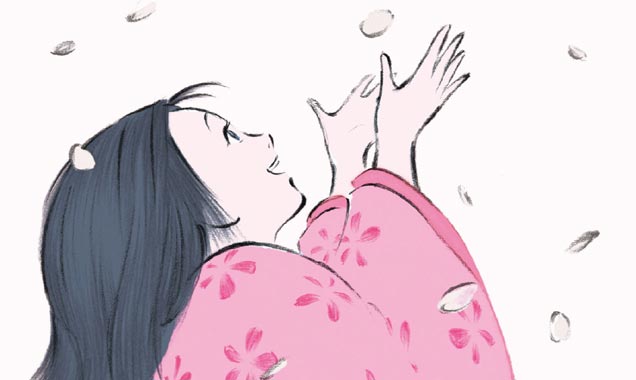 The story begins in the countryside, where farmer Okina (James Caan in the English-language version) finds a tiny girl (Chloe Grace Moretz) in a bamboo stalk. Believing her to be a princess, he raises her with his wife Ouna (Mary Steenburgen). When he finds silk and gold in his bamboo grove, Okina decides that the gods want them to raise the now-teen girl in a more regal setting, so they all move to the capital, where she's officially named Princess Kaguya and becomes the most eligible girl in the kingdom, attracting offers from five wealthy men, plus His Majesty (Dean Cain) himself. But Kaguya is longing for the quieter life in the country, and misses her childhood pal Sutemaru (Darren Criss).

As it develops, the story becomes deeper and richer, offering hints as to where the events are headed, although nothing prepares us for the final-act sequence, which feels almost anachronistic in its surreally eclectic splendour. But by then, we have become completely engulfed in Kaguya's story, identifying with her longing to reconnect with the friends who used to call her "L'il Bamboo" because she grew up much more quickly than they did. This tension between sophisticated high society and rural simplicity adds an extra layer of meaning to the entire film, as does the running commentary about Japan's gender politics. And the hint of romance between Kaguya and Sutemaru offers further subversion of the social order.

Thankfully, all of this plays out with a remarkable lightness of touch, especially in the original Japanese language. And the imagery is simply uncanny, resembling pen and ink drawings that have been washed with watercolours. It's a feast for the eyes, while the story gets deep under the skin. So even if it some of the plot turns feel rather repetitive, and although the conclusion is a bit floaty and bizarre, the film is such an original experience that we feel like we've been taken somewhere utterly magical for a couple of hours. And we're not sure we want to come back to the real world afterwards.