A wrenching saga of survival and revenge, Alejandro G. Inarritu's new epic is just as technically astounding as his Oscar-winning previous film Birdman. But it's a much muddier and bloodier, set in a a snowy, mountainous Wild West in which everything is a potentially fatal hazard. There may be some human villains on hand, but it's Mother Nature who holds the cards. 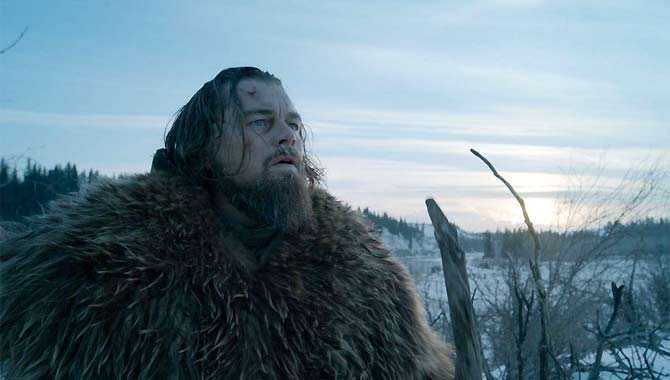 At the edge of civilisation in the 1820s, a group of fur trappers led by Henry (Domhnall Gleeson) is ambushed by a ferocious mob of Native Americans led by Chief Elk Dog (Duane Howard), who is looking for his kidnapped daughter. As the trappers flee from the attack, they are assisted by the guide Glass (Leonardo Dicaprio), who knows these mountains because he has gone native, adopting an orphaned teen boy named Hawk (Forrest Goodluck), who now accompanies him. But as the survivors make their escape, Glass is badly mauled by a grizzly bear. Henry assigns the compassionate Bridger (Will Poulter) and the more cynical Fitzgerald (Tom Hardy) to take care of him. But Fitzgerald snaps, leaving Glass for dead. Against the odds, Glass recovers and sets out to get vengeance.

The title refers to someone who comes back from the grave, which is literally what happens to Glass. And DiCaprio plays him with fire-eyed intensity that vividly shows his tenacious will to survive. Moody flashbacks reveal his back-story, and why living means so much to him. It's one of DiCaprio's most viscerally moving performances. Opposite him, Hardy is a bundle of unpredictable, terrifying rage, thankfully balanced by the expressively sympathetic Poulter and Gleeson's alert commander, the only person who takes the time to measure his thoughts. They're surrounded by a terrific supporting cast of sparky actors who appear briefly but memorably.

Inarritu directs each scene with exhilarating touches, from the ferocious opening attack to a stunning horseback chase shot in one long take, right off a cliff edge. The mountainous terrain is a character in the story, forebodingly covered in ice, pushing each man to the brink. Meanwhile, the script fills in all kinds of intriguing thematic details, from the man-versus-nature element to the violent clash between European interlopers and the indigenous population. So in the end, it becomes far more than a simple revenge thriller. This is a story about the fragility and resilience that are built into human nature. It's also a striking exploration of the impact of greedy machismo (the few women are either victims or angels). And these strong themes make sure that the audience's brains are just engaged as their guts.