Recounting a personal story of the horrors of Pol Pot's Killing Fields in 1970s Cambodia, filmmaker Rithy Panh finds inventive ways to convey his emotions. But the film's sleepy pacing and artful style make it eerily uninvolving, like a particularly striking museum exhibition that reminds us of a vitally important event in human history that must never be forgotten. And as the title suggests, forgetting is something Panh refuses to do. 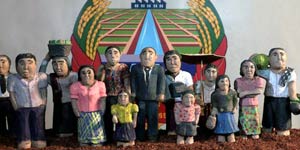 At age 50, Panh (voiced by Douc in the poetic but glum French-language narration) sets out to document his memories of his experiences following the 1975 Kmer Rouge revolution. A 13-year-old at the time, he was taken away with his family and forced to work in rice fields in grisly conditions. With no food to eat and violent treatment by their guards, the family is torn apart, leaving Panh as the only survivor. But where is Pol Pot's promised classless utopia? The nation has been turned into a land of uneducated slaves who get no benefit from the rice fields and factories where they are forced to work.

The documentary opens with the discovery of crates of old film footage, which is woven in with Panh's painstaking recreations of scenes using wood-carved figures and elaborate tableaux. These are the old films made by the oppressive dictators, attempting to romanticise the revolution but instead revealing telling details of the grim reality of life in the filthy work camps. And Panh fills in what these movies don't show: the torture and murder, the famine and diseases, the desperation and senselessness.

No, this isn't very easy to watch, especially since it is telling the story through the eyes of a child. But the diorama approach distances us from the gruesome reality, while the slow-paced storytelling, downbeat narration and mopey musical score leave us yearning for even a glimpse of human spirit. Instead, this is a story about quiet resilience, the randomness of survival and the extremely subtle ways suppressed people rebel against tyranny. It may not offer much hope for those who are oppressed now, but it reminds us that it takes generations for a society to recover from this kind of nightmarish evil.