Using remarkably photorealistic animation, this remake of the 1967 Disney classic is warm and enjoyable, with a few moments of suspense for the kids in the audience. Loosely based on Rudyard Kipling's stories, it's a lively tale packed with memorable characters. But it feels relentlessly tamed for a family audience. Stranded in the jungle as a baby, Mowgli (Neel Sethi) was rescued by the panther Bagheera (voiced by Ben Kingsley) and raised by a pair of wolves (Lupita Nyong'o and Giancarlo Esposito). But the presence of a human in the jungle is unacceptable to tiger Shere Khan (Idris Elba), who was injured by a man and now wants Mowgli's blood. While fleeing to the human world, Mowgli has a fateful encounter with the seductive python Kaa (Scarlett Johansson). He's rescued by the bear Baloo (Bill Murray), with whom he has a series of adventures, including being kidnapped by a gang of monkeys led by King Louie (Christopher Walken). But Shere Khan is still searching for him, and Mowgli can't hide forever.

Filmmaker Jon Favreau (Iron Man) keeps the story skimming along the surface, avoiding the darker themes woven into the premise. So instead of exploring the meaning of humanity or mankind's relationship with nature, the film is a breezy adventure romp with the usual action movie beats and some surprisingly nasty violence. And it looks utterly amazing, especially since the credits note that it was filmed completely in downtown Los Angeles.

The detail in the digital animation is beautiful, with animal characters who look remarkably realistic, drawing on elements of the actors providing their voices. The most endearing characters are Murray's damp-eyed bear and Walken's gangster-like ape. Elba provides a terrifically growly menace as Shere Khan, while Kingsley's purring panther anchors the story with knowing narration. As the only real actor on-screen, Sethi has a lanky likeability if not much depth of character.

Clearly made for children, this film meanders along cheerfully, with occasional nods to the classic movie and its memorable songs (three numbers are performed in full during the eye-catching closing credits). But there isn't very much here for adults. The filmmaking is rather perfunctory, especially in the annoyingly shaky-cam action scenes, and the plot structure heads relentlessly to a big climactic sequence that is little more than a collection of cliches. But this is an enjoyable story about a boy discovering that what makes him different from everyone else is what makes him valuable to the community.

Watch the trailer for The Jungle Book: 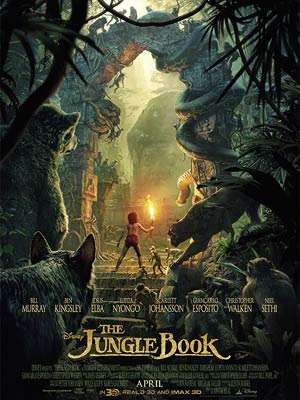