Marketed as a horror-thriller, this sharply well-made film is actually a bleak drama with a strong message about bullying. Actor turned writer-director Joel Edgerton creates a vividly creepy atmosphere as he digs into the perceptions and motivations of three central characters, and he finds plenty of opportunity to unnerve the audience in the process. There are a few big jolts, but it's the unsettling themes that freak us out.

There has clearly already been quite a lot of trauma in the marriage between Simon and Robyn (Jason Bateman and Rebecca Hall), so much so that they've packed up their home in Chicago and moved to Los Angeles to start over. As they're settling into their stunning new home in the hills, Simon runs into his old school friend Gordon (Edgerton), who seems to appear out of nowhere, worming his way into their life with a series of thoughtful gifts. But Simon doesn't want to reconnect with Gordon, whom he always thought was a weirdo, which Robyn thinks is rather cruel. She reluctantly agrees with Simon that they break contact with Gordon, due to pressures at work and in their attempts to start a family. But things immediately turn very nasty. And Robyn realises that there's more to Simon and Gordon's past than either is letting on.

With a pungent sense of foreboding, the film is instantly riveting, mainly because it resembles movies like Fatal Attraction. So we brace ourselves for that bunny-boiling moment, and as a writer, director and actor, Edgerton plays with us mercilessly, dropping all kinds of hints and revelations about the reality beneath the surface of these characters. But instead of turning into a crazed, violent thriller, the film instead takes a much more internalised approach, generating suspense from the implications of what is happening. Essentially, it works because it forces us to understand even the darkest motivations of the characters.

All of this means that the film sometimes feels a bit slow, and also rather preachy as the themes become more clearly defined. But the actors hold their nerve in roles that push them to the brink. Bateman has never quite gone this dark before, peeling away Simon's snarky outer layers to reveal something else entirely. Edgerton cleverly mixes Gordon's awkward social skills with suggestions of a deeper agenda. And Hall has the film's most complex role as a haunted woman trying to sort out her own life while she seeks the truth about her husband. Ultimately, the film gets under the skin because of these finely observed characters and Edgerton's refusal to indulge in revenge-thriller cliches.

Watch the trailer for 'The Gift' here: 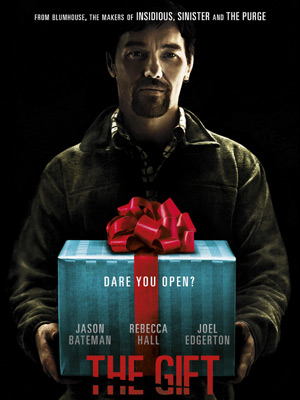