Without a single moment of originality, this found-footage horror movie really deserves to be the last one ever made. Combining elements of Blair Witch and Paranormal Activity with the cliches of 1980s teen slasher movies, the film is technically well-made and at least has a bright young cast. But by adding nothing new to the genre, it's unable to muster up more than one scary moment. 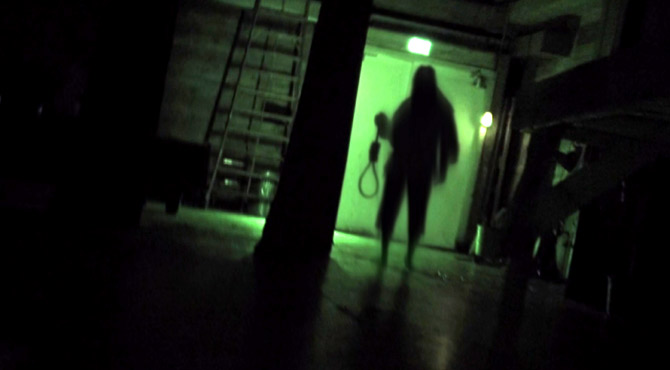 It all takes place in a high school 20 years after Charlie (Jesse Cross) died during a stage production of a creepy play called The Gallows. Now the drama teacher (played by cowriter-director Travis Cluff) has convinced the school board to let him restage the play, and he has cast popular jock Reese (Reese Mishler) in the lead role opposite drama queen Pfeifer (Pfeifer Brown). But the nervous Reese secretly has a crush on Pfeifer, and his camera-carrying best pal Ryan (Ryan Shoos) says he needs to sabotage the play so he doesn't embarrass himself on opening night. So Reese, Ryan and Ryan's girlfriend Cass (Cassidy Gifford) sneak into the theatre one night planning to trash the sets. But Pfeifer turns up as well, and suddenly they find themselves locked in, menaced by some sort of unseen force that seems intent on strangling them one by one.

Since the young actors are using their own names, they're essentially playing themselves. And the script offers very little help for them to create properly dramatic characters, never giving even a glimpse beneath the surface. Instead, it's just a case of watching through Ryan's camera as these four intriguing teens run around acting self-involved and clueless, kind of like real teens. As in all of these movies, there is inexplicably no phone signal and the camera magically continues shooting even after the battery should have died. It's also structured as several long, dull sequences in the dark punctuated by moments of inexplicable chaos.

There are also the usual problems with the found-footage itself, as several sequences would be impossible to shoot, especially by people running for their lives. And everything has been augmented by horror-movie sound effects designed specifically to make the audience jump. At least there's one skilfully set-up sequence that builds a sense of menace before it pounces viciously. Otherwise, this is just a collection of tired cliches, cheap tricks that aren't actually scary but seem like they should be. And without any depth in the plot, there's no reason why the audience should care what happens to these kids. So why should it be entertaining to watch them die one by one?

Watch the trailer for The Gallows here: