While cinematic blockbusters tickle the eyes, this film dazzles the soul. This is a remarkably evocative drama that gets deep under the skin, challenging us to see ourselves in a rather outrageous situation that shifts from quietly disturbing drama to unsettling freakiness. It's strikingly written, directed and performed to get into our heads and stay there like few movies do. 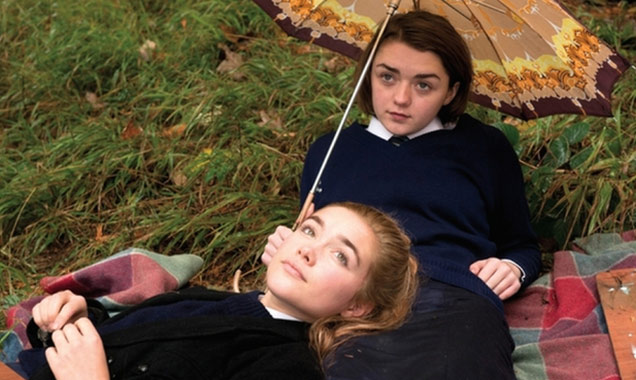 The story is set in 1969 in a girls' school located in the lush English countryside, where 16-year-old Lydia (Maisie Williams) and her best pal Abbie (newcomer Florence Pugh) are members of the Alternative School Orchestra. They're also inseparable, carving their undying love into a tree trunk. But once Lydia has sex with a boy, their relationship begins to shift. And when Abbie faints in class, it seems to become contagious. Suddenly girls are collapsing all around the school, much to the consternation of the headmistress (Monica Dolan) and her stern deputy (Greta Scacchi). As the hysteria spreads, Lydia gets increasingly confused by the occult beliefs of her older brother (Joe Cole) and the agoraphobic behaviour of their mother (Maxine Peake). But what she really misses is her childhood connection with Abbie.

Writer-director Carol Morley (Dreams of a Life) lets this play out like a deranged fairy tale in which Lydia's voyage to self-discovery is both wondrous and terrible at the same time. In its vivid exploration of feminine adolescence, the film echoes such classics as Picnic at Hanging Rock or Heavenly Creatures, by way of David Lynch and Nicolas Roeg (whose son Luc is one of the producers here). And the bold, knowing themes are echoed in gorgeously artful cinematography by the great Agnes Godard plus a stunner of a soundtrack by Tracey Thorn. Amid this sumptuous atmosphere, Morley weaves an enigmatic story packed with mystery, revelations and yes, burgeoning sexuality. But even more than this, the film taps in to the earth-mother power girls discover as they emerge into womanhood.

All of this gives the superb cast a lot to work with, and Williams makes good on her magnetic presence as Arya in Game of Thrones, holding the screen as a strong-willed young woman trying to make sense of herself. The performances around her are perfectly gauged to feed into her personal journey while giving the film a groovy summer of love sensibility that includes both jagged comedy and intimate interaction. The artful approach might be a bit much for audiences who like their movies simple and formulaic, but everyone else will find themselves exhilarated by the way Morley taps into something almost primal in all of us.