Narrated by Daisy Ridley (The Force Awakens), this documentary is one of the most gripping adventure stories put on film this year, as cameras follow a group of remarkable real people. For his directing debut, British filmmaker Otto Bell takes the audience with him to a whole new world on the Mongolian steppe and introduces us to a young woman who we will never forget. The film is visually stunning, and tells a story that carries a proper emotional kick. 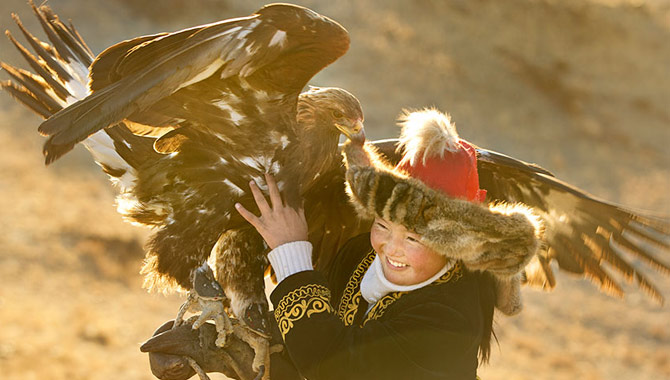 It centres on Aisholpan, a confident 13-year-old who simply doesn't buy into her culture's patriarchy. According to tradition, only males can hunt with eagles, but she has decided to be the next in her family's long line of champion hunters. Her father Nirgaiv recognises in her both the needed skill and tenacity, so he begins to train her. The first task is to capture her own eaglet, accomplished by scaling a precarious cliff and grabbing a baby from a nest as its angry mother circles above. Then Aisholpan must raise it herself, so that it learns to respond to her call. Her eaglet is so impressive that she enters the annual Eagle Hunter Festival competition as the first-ever female huntress and the youngest competitor ever. And the elders don't like this at all.

The film is edited with plenty of witty energy, as the elders continually talk about the things women can't do, while Aisholpan proves them wrong at every step. But the most impressive thing about this film is the way Bell and his crew capture everything on-camera, including the jaw-dropping sequence in which Aisholpan captures her eaglet. The competition is heart-pounding and emotional. And the final challenge for Aisholpan is to actually travel into the snowy wilderness and use her eagle to hunt down a fox. Only a few of these scenes seem somewhat re-staged for the cameras, but that doesn't make them any less exciting or moving.

It also helps that Aisholpan has such a huge personality. She's a mischevious, girly teen who also happens to be a hunting prodigy. She's easy to root for as she rejects the expected housekeeping role for women and opts instead to compete with the men. Bell shoots this with striking visual panache, warming with the characters in their isolated yurt while also taking in an eagle-eyed view of the spectacular landscape around them. It's a skilful combination of local colour, natural beauty and, most importantly, the universal theme of taking control of your life and achieving your potential on your own terms. And frankly, Bell's own adventure filming all of this would make a great making-of movie.

Watch the trailer for The Eagle Huntress: Starring: Aisholpan Nurgaiv as Herself, Nurgaiv Rys as Himself, Alma Dalaykhan as Herself, Daisy Ridley as Narrator (voice)