Director Tom Hooper deploys the same style he used in The King's Speech for this much darker story about the first man to undergo gender-reassignment surgery. It's an odd mix of rather too-pretty visuals with an edgy series of events that perhaps demands a lot more raw honesty. But the story is fascinating, and the cast is excellent, delivering astute, introspective performances that reveal the much earthier narrative under the lovely surface. 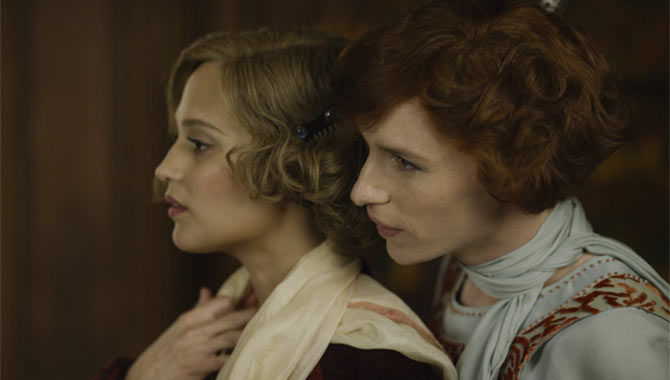 It opens in 1926 Copenhagen, where husband and wife painters Einar and Gerda Wegener (Eddie Redmayne and Alicia Vikander) are hoping to start a family as they develop their careers. One day, Gerda talks Einar into putting on a dress to pose for one of her paintings, and the experience triggers long-suppressed yearnings from his childhood. Gerda and their friend Ulla (Amber Heard) encourage him to attend a party in drag, and Lili Elbe is born, Einar's female alter ego who immediately attracts the attention of a lovelorn man (Ben Whishaw). After they move to Paris, they find another friend in Gerda's agent Hans (Matthias Schoenaerts), who was Einar's childhood pal. But while the French doctors think Einar is simply crazy, Gerda sticks by him as he decides to undergo a radical experimental surgery offered by a doctor (Sebastian Koch) in Germany.

Hooper's usual directorial flourishes include off-centre compositions, painterly sets and emotive close-ups, which bring out the internal struggles of the characters in beautiful ways. But this also has a tendency to simplify a story that is seriously complex. By emphasising the social conflicts and relational melodrama, the entire movie begins to feel rather thin, never quite grappling with the more provocative or disturbing aspects of the issues at hand. There are hints of what might have given the film an edgier kick, such as a moment of Hitchcockian obsession or the shifting of power between the male and female characters.

Thankfully, Redmayne delivers an impeccable performance, cleverly capturing the delicate shift as Lili finds her voice and Einar begins to disappear. This also gives Vikander a meaty role to play as a woman grieving for the loss of her husband, even as she adores Lili. And while the supporting cast are all excellent, it's this push and pull of love between Einar and Gerda that gives the film its soul. So as the film kind of sidesteps the bigger themes, this involving central relationship carries the audience through the story. But a brittle, challenging approach would have made it much more memorable.

Watch the trailer for The Danish Girl here: