Fans of the surprise 2012 hit Ted will find plenty to love in this sequel, in which Seth Macfarlane takes the same approach: throwing every kind of gag at the screen in the hopes that some of them stick. Thankfully, there are quite a few laugh-out-loud moments to make sure the film is continually entertaining, even if the plot isn't particularly inventive. 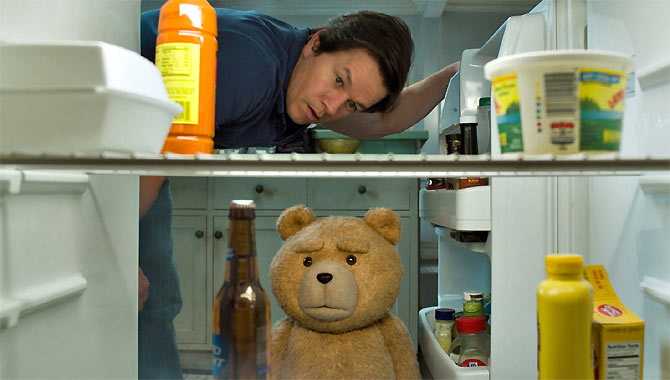 In the past three years, John (Mark Wahlberg) has seen his marriage fall apart, while Ted (voiced by MacFarlane) has married his girlfriend Tami-Lynn (Jessica Barth). A year later, Ted and Tami-Lynn are in a rut and decide that perhaps a child will help kickstart their romance. Unable to conceive for obvious reasons, they turn to adoption, but this raises a red flag about Ted's status in society: he isn't actually a person, and the state declares that he's property. On the verge of losing everything, Ted and John hire novice lawyer Samantha (Amanda Seyfried) to defend Ted's right to be treated as a person. But their opponent is a slick lawyer (John Slattery) hired in secret by toy company Hasbro, which is now in league with Ted's long-time stalker-nemesis Donny (Giovanni Ribisi).

The ongoing central gag here is that John and Ted have never grown up, stuck in their dope-smoking fanboy ways, which allows for all kinds of rude mayhem, plus lots of cameo appearances from genre stars, including a gratuitous trip to New York Comic-Con that turns into the film's funniest sequence with a series of sublimely silly running gags. On the other hand, the one-joke premise badly limits the film's scope for coherent storytelling, merely dashing from one nutty set-piece to the next and hoping that something funny will happen. Thankfully, most sequences are genuinely amusing, at least for audiences whose goal is just to have a good time at the movies.

Wahlberg is clearly having a lot of fun here, willing to indulge in all kinds of humiliating slapstick (including a gratuitously sticky mess at a sperm bank), and his chemistry with Seyfried has some spark as well, mainly because the pot-loving Samantha is a slightly smarter version of himself. As in the original, Ribisi has the most thankless, irrelevant role, merely on board to provide some random action. But the big-name costars and cameos keep things lively, adding a hint of drama and emotion that ultimately boils over into a corny sentimental finale. It's not quite clever enough to be a classic, but watching these idiots is sometimes hilarious. So we wouldn't mind seeing them return for a third go.

Watch the trailer for Ted 2 here: