The fact that this film was shot entirely on an iPhone is forgotten before it reaches the end of the snappy opening conversation. These are some of the best movie characters in recent memory, and their interaction overflows with wit and attitude. The audience is immediately gripped, eager to see where they'll go and what they might do or say next. 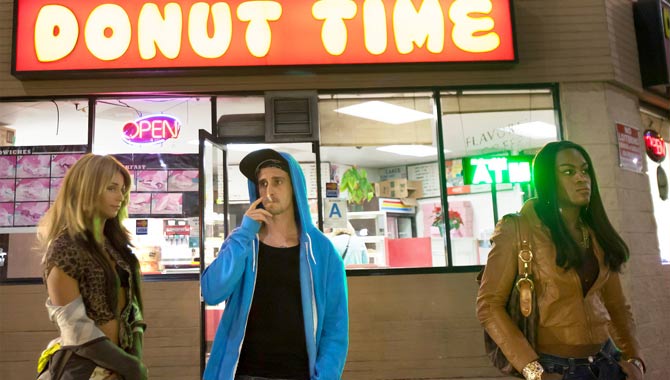 It's set on the grimier end of Hollywood Boulevard on Christmas Eve, where Sin-Dee (Kitana Kiki Rodriguez) has just been released from a month in jail for prostitution. Her fellow tranny hooker pal Alexandra (Mya Taylor) meets her, reporting that Sin-Dee's pimp/boyfriend Chester (James Ransone) has started seeing a real woman. Sin-Dee is horrified, and sets out to find this "real fish" Dinah (Mickey O'Hagen) and give her a piece of her mind.

Meanwhile, Alexandra is preparing for her big night singing in a local bar, trying to drum up an audience. Along the way, she meets up with her regular client Razmik (Karren Karagulian), whose meddling mother-in-law (Alla Tumanian) is determined to prove to his wife (Luiza Nersisyan) that he's cheating on her.

Director-cowriter Sean Baker lets Rodriguez and Taylor run wild with their characters, improvising catty comebacks in every conversation. Their timing is impeccable, ricocheting off each other with riotous energy. And every character in the film bristles with the same energy, which remarkably never becomes exhausting. Because despite the outrageous bitchiness, these are startlingly realistic people who are easy to identify with. In between the hilarious interaction, they reveal their insecurities and yearnings. And the side characters also have something they are hiding about themselves. So even though they live in a rather desperate world of sex and drugs, their true hopes and fears aren't that far removed from ours.

Most impressive is the fact that Baker and his cast never get preachy about this lifestyle. They are telling an authentic story in a real setting, capturing the truth about a place we think we know. We've never seen this side of Los Angeles so sharply portrayed on film, and the combination of glamour and squalor is both intriguing and rather fabulous. And then the story's real theme turns out to be loyalty, specifically how real love and friendship can survive being pushed to the limit. So as it unfolds, this ceases to be a low-budget comedy about transgender hookers on Hollywood Boulevard. It's one of the warmest and most astute Christmas comedies ever made.
Rich Cline

Watch the trailer for Tangerine here: