Anyone tired of seeing the same old movies over and over again should rush to find this remarkable Portuguese film, which defies genres and continually surprises us with its lively style and offbeat storytelling. It was an unexpected hit at this year's Berlin and Edinburgh film festivals, where cinema lovers embraced the offbeat genius of filmmaker Gomes. 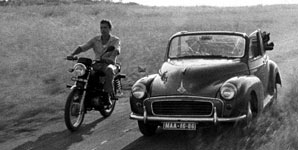 Shot in pristine black and white, the film has three distinct chapters, which increase in length and are interwoven by both characters and themes. The first is a film within the film, a historical account of a king so despondent about his wife's death that he treks into deepest Africa to lose himself. Watching this is Pilar (Madrugada), a woman in present-day Lisbon who is entangled in the life of her batty old neighbour Aurora (Soveral), who's sure her black maid (Cardoso) is an evil witch. As Pilar seeks out Aurora's old love GianLuca (Espiritu Santo), she learns Aurora's history, which is shown in an extended flashback that becomes the film's main plotline.

This final half of the movie is simply beautiful, combining storytelling styles to follow the young Aurora (Moreira) as she lives in Africa at the foot of Mt Tabu with her husband (Muller). But his adventurer best friend GianLuca (Cotta) catches her eye, and their torrid affair threatens to undo the delicate balance of their colonial life. Gomes tells this part of the story with a flourish of style that catches our imagination. We hardly notice that there's no actual dialog, as GianLuca recounts the events with such detail that we are emotionally gripped, and the gorgeous sound mix fills in the atmosphere.

There's even a lively 1960s pop music element to the story.

In other words, this is one of those films that entrances the audience with its sheer audacity. Every scene is unexpected and magical. And as it progresses we begin to understand that Gomes is exploring the inner desire we all have to find paradise somewhere in our lives. Using the potent themes of colonialism, racism and romantic infidelity, he triggers our memories with details we might not quite understand. But we feel it in ways that are achingly beautiful.