DC Comics' villains team up for an overcrowded action movie that never quite finds its tone. Writer-director David Ayer takes a serious approach to an absurd premise, while the actors inject sparks of bitter humour. But with a thin plot and characters that are only superficially developed, the film struggles to grab hold of the audience. At least there's plenty of whizzy action mayhem.

With everyone worried that the next Superman might turn out to be a terrorist, government agent Amanda (Viola Davis) has a crazy idea to turn the most violent criminals in prison into an elite black ops team. These include gruff marksman Deadshot (Will Smith), mentally unstable sexpot Harley Quinn (Margot Robbie), archaeologist-turned-enchantress June (Cara Delevingne), Aussie killer Boomerang (Courtney), fire-maker Diablo (Jay Hernandez), swordswoman Katana (Karen Fukuhara) and man-monster Croc (Adewale Akinnuoye-Agbaje). Each of these psychos has a personal weakness Amanda and team leader Rick (Joel Kinnaman) plan to leverage to keep them under control. Meanwhile, Harley's main squeeze Joker (Jared Leto) is trying to help her escape. Oh, and a meta-human wants to decimate humanity.

Ayer introduces each character with his or her own mini-montage, including snippets of back-story and cameos from the likes of Batman (Ben Affleck). These flashbacks continue throughout the movie, stirring emotion into various characters' decision-making processes. But that's about it as far as depth goes, and the script never imagines anything more original than pining after a lost love, missing a child or feeling guilty about past mistakes. While this adds a bit of interest, it never generates any proper connections, either between the characters or with the audience.

The cast does what they can with this. Smith, Kinnaman and Hernandez generate the most texture in their conflicted characters. Leto is mesmerising in a marginal role. The woman are more compelling, even as Ayer does little beyond sexualising their every move: Robbie finds a hint of pathos under Harley's giggling insanity, Davis offers some steely resolve, Delevingne some emotional colour and Fukuhara some personal pain.

This is a very crowded movie, so it's understandable that Ayer sidelines and even abandons some characters. As everything builds to a massive confrontation in a big movie set augmented by lots of digital effects, it's difficult to escape the feeling that all of this is rather boring. The snarky attitude is toothless. The peril is limited mainly to an army of literally faceless soldiers. And the threat against the planet never seems very likely, as the big CGI "weapon" swirls and swirls as if it's waiting for something exciting to happen. Hopefully, this is just a messy introduction to these characters. They deserve better adventures than this.

Watch the trailer for Suicide Squad: 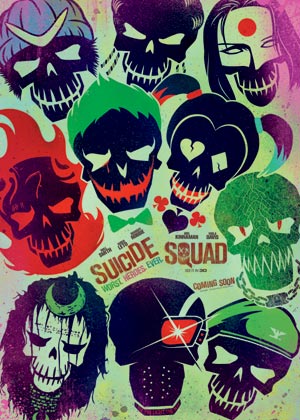