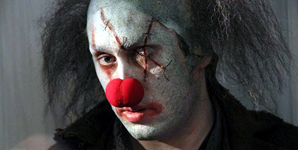 There are moments of inspired black comedy in this Irish slasher spoof, but the movie is undermined by its obviously miniscule budget. This means that the script is under-developed, with a nonsensical plot and some dire jokes that leave it feeling like a corny mess rather than an astute spoof of 1980s-style slasher movies.

The craziness begins when Stitches the Clown (Noble) is hired to play at a 10-year-old's birthday party, where rude children cause a fatal accident straight out of a Final Destination movie. Six years later, Tom has never celebrated his birthday again. But since his mum (Spelman) is away for the weekend, his friends plan a raucous party. And Stitches rises from the dead to get revenge, killing the now-teen brats in a variety of colourfully grotesque scenarios.

Director-cowriter McMahon assembles this like a standard 80s horror movie, with a houseful of sex-mad teens heading unwittingly into grisly violence. But it's played for laughs, with gleefully over-the-top performances that are so cartoonish that we're never remotely scared. At least we do get to laugh when the rare gag hits its target. Especially enjoyable is the way the film plays with people who are afraid of clowns. Tom's blood-soaked visions of the evil Stitches are marvellously silly, and his quiet crush on the sexy Kate (Devereux) adds a touch of emotion under the insanity.

So it's a shame that the movie is so relentlessly cheesy. Much of the script is just inanely unfunny, with uneven pacing, cheap jokes and stilted acting. It's so clunky that its brief 86-minute running time begins to feel never-ending. And as the story devolves into mindless chaos, there's not much left for us to enjoy beyond what the film might have been with a bit more script-writing time and effort. At least there are outtakes along with the closing credits to send us out of the cinema with a smile.