Still the Enemy Within

Still the Enemy Within Review

Like a companion piece to the feel-good drama Pride, his documentary was designed to explore the untold story of the 1984 British miners' strike, so even if it feels rather one-sided it's a strikingly personal portrait of a notorious chapter in British history. Straightforward and unfussy, the film simply allows the miners and their supporters to have their say, backed up by extensive period footage of their year-long struggle against ruthless oppression. But the lack of any balancing commentary leaves the film feeling slightly incomplete. 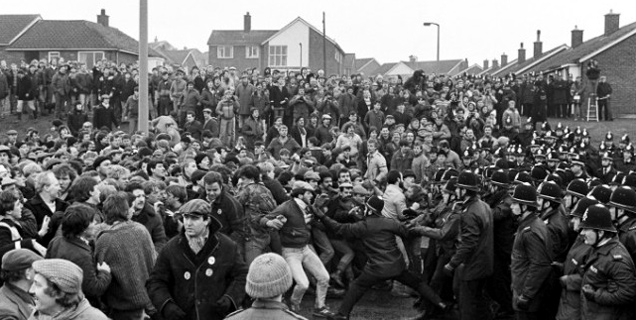 Filmmaker Owen Gower's project was sparked by recently declassified documents that carefully show how Margaret Thatcher's first order of business after being elected as prime minister in 1979 was to crush the labour unions, starting with the biggest of them all: the mineworkers. Despite the nation's need for coal, she announced plans to close 70 mines, seemingly at random, so the union went on strike in March 1984. Over the next year, Thatcher systematically militarised the police and sent them to war against the strikers, so by early 1985 the miners were battered, starving and freezing, because they couldn't afford to pay for food or heating. In the end, Thatcher won, and the miners went back to work in March 1985.

The sobering fact is that in 1983 Britain had 174 working coal mines, and today there are only six. Britain now has to import virtually all the coal it needs. And the fallout of Thatcher's dismantling of the industry doesn't end there: the mass unemployment in the 1980s caused problems that still ripple throughout the UK, while the methods Thatcher's government used were carefully integrated into efforts by giant corporations to use privatisation to divert wealth from nations to investors, all at the expense of the working class. Intriguingly, the film includes footage of union leader Arthur Scargill predicting just that before the strike even began.

The wealth of archive material is impressive, with newsreels, photos, home movies and government propaganda, as well as some black-and-white re-enactments. There's also plenty of footage of Thatcher and Scargill locking horns in the media, while the present-day interviews offer telling observations on how things were on the front lines of the strike. But there's never a contrasting opinion, which means that the film never offers any true analysis of what happened, which would only have strengthened the things that make this documentary so important. But even as it is, it's a strikingly clear look at how Thatcher's master plan destroyed centuries of job-for-life security, creating a working class that is increasingly in need of help to survive. In other words, it's also the story of the birth of the one percent.