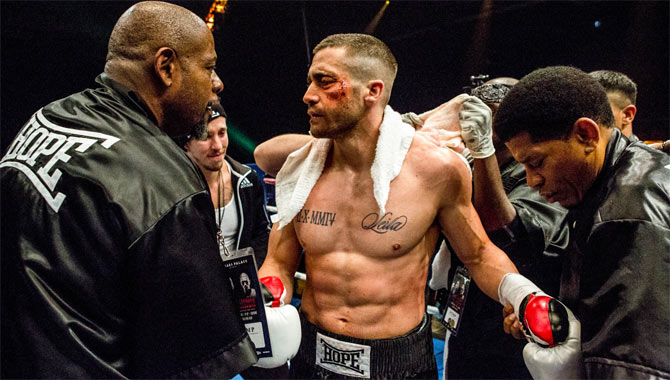 Clearly, director Anton Fuqua and screenwriter Sutter were much more interested in the standard gyrations of the boxing grudge match movie than the complex themes raised throughout the story. There are opportunities along the way for involving explorations of the dangers of fame, corruption in sport, grief and even a murder mystery, but the filmmakers simply ignore these issues to indulge in another banal plot point that we've seen hundreds of times before. There isn't a single moment in the film that's original or provocative. At least the boxing matches are shot with brutal energy, and even the requisite training montage is livened up by Eminem's edgy title track. And with Gyllenhaal's wrenching performance, the film is still worth a look. But he's the kind of actor who is great at digging beneath the surface of a character, and Fuqua never gives him a shot.

Watch the trailer for Southpaw here: