From Hungary, this year's Oscar-winning foreign film is a remarkably fresh take on the Holocaust drama. It's difficult to imagine a new way of approaching that topic, but writer-director Laszlo Nemes has come up with something that's staggeringly powerful in its simplicity, as he closely follows a tenacious man over two days at Auschwitz in 1944. Of course it's not always easy to watch. But it's so beautifully shot and acted that it's unforgettable. 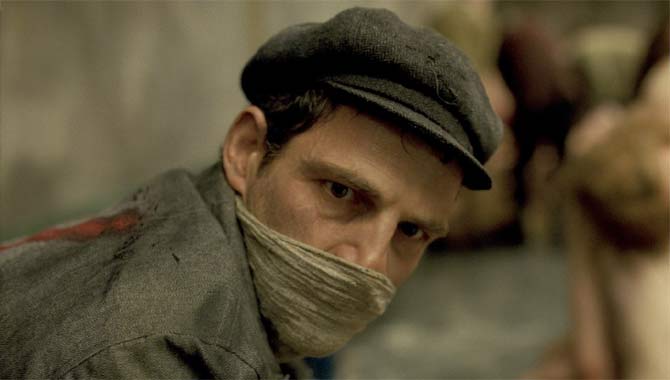 The camera sticks very close to Saul (Geza Rohrig), a Jewish man working as a sonderkommando, threatened with death if he doesn't help the Nazis run their death camp. While cleaning out the gas chamber, Saul finds a young boy who's still barely alive. After the child dies, Saul asks the doctor (Sandor Zsoter) if he can secretly take the body and bury it according to Jewish tradition. This triggers an elaborate odyssey in which Saul tries to find a rabbi among the prisoners, during which he becomes entangled with a group that's planning a daring escape. Despite continual distractions, Saul never wavers on this quest, which gives his life meaning for a change as he imagines that he is doing all of this for his own son.

The trajectory of these events can hardly help but be deeply wrenching, considering the setting and subject matter. But filmmaker Nemes tells the story with a remarkable sensitivity, as the camera circles around Saul like a pesky fly in breathtakingly long shots. The horrors of the camp are blurred into the background, as if Saul has become numbed to them. And Rohrig is hugely engaging, a likeable man who clings to this mission even as he is continually dragged from it by heartless guards and pushy fellow inmates. Rohrig beautifully shows how Saul has learned to play the system and hide his emotions, although these events bring them surging dangerously close to the surface.

With its driving story and strikingly realistic setting, this film is utterly gripping. And it's also darkly disturbing in ways that are never expected. Hearing the German officers refer to the Jews as "swine" is brutal, and so is the arrogant machismo of the prisoners who are planning to flight back. In other words, there's a complexity to the movie that gets deep under the skin, offering a haunting insight into the power of human resilience and hope. And the film's skilful artistry is a potent reminder that there are always new ways to understand events we thought we knew too well already.

Watch the trailer for Son Of Saul: