First-time feature filmmaker John Maclean takes a strikingly original approach to the Western, creating a realistic road trip for two very different men. Genre fans might wish it was more of a shoot-em-up (the massive final gun battle is astonishingly earthy), but it more than makes up for that with a strong sense of its characters and settings. And by shooting it in New Zealand, Maclean found an unspoiled, spectacular landscape that has its own memorable impact. 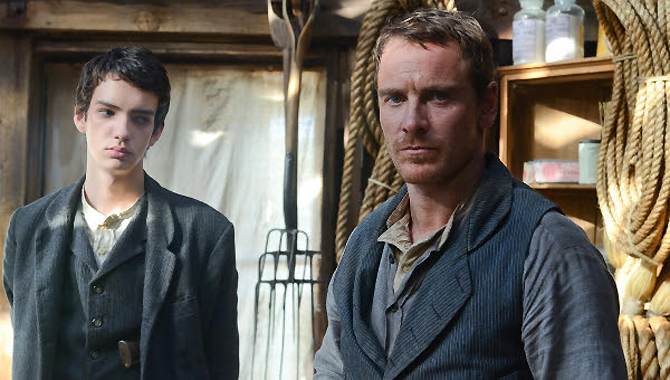 The story centres on Jay (Kodi Smit-McPhee), a tenacious 16-year-old travelling from Scotland to find his beloved Rose (Caren Pistorius), who has moved to the Wild West with her father (Rory McCann). As Jay enters dangerous bandit country in Colorado, he meets bounty hunter Silas (Michael Fassbender), who offers to accompany him through the perilous forests and mountains ahead. What Jay doesn't know is that Silas used to be in the most feared gang in these hills, led by his old pal Payne (Ben Mendelsohn). And as they traverse the landscape, meeting various robbers and some angry Native Americans, Payne is never too far behind, because he's hoping they'll lead him to Rose and her father, who have a $2,000 bounty on them, dead or alive.

What makes this movie so engaging is the growing connection between Jay and Silas, who aren't quite as different as they seem to be on the surface. Smit-McPhee plays Jay as soft and naive, and yet his fearlessness shows a steely inner strength that should never be underestimated. Meanwhile, Fassbender gives Silas a jaded charm as the stranger who doesn't want anyone to know who he really is. While Jay wears his emotions on his sleeve, Silas clearly feels them just as strongly but has learned the hard way to keep them bottled inside. Especially while living in a place like this, where any true sense of civilisation has yet to take root.

Their journey is a series of adventures as they overcome their mistrust of each other and work together to survive whatever they come across. It's a deceptively slow, complex film with a relaxed pace and flashbacks that illustrate the tall tales the characters tell. And what makes it gripping is the way Jay is forced to understand the life-or-death nature of his journey, even as Silas is pushed to rediscover his own humanity. And even if it feels somewhat meandering, Maclean plays up the subtle corners of these men's inner lives just as strongly as he revels in the magnificence of nature around them.

Watch the trailer for Slow West: