A buoyant celebration of the power of music, this is the third blissfully entertaining musical romance from John Carney, who also wrote and directed Once and Begin Again. Set in the 1980s, this brightly comical film is packed with fabulous songs, both real hits from the period and fantastic pastiche numbers. And it's vividly performed by a fresh cast. 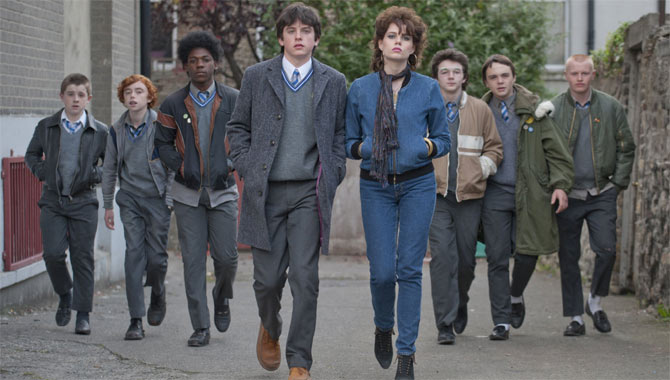 It's set in 1985 Dublin, where 15-year-old Conor (Ferdia Walsh-Peelo) is furious when his parents (Aidan Gillen and Maria Doyle Kennedy) transfer him to a local catholic school due to financial trouble. Conor's adored older stoner-rocker brother Brendan (Jack Reynor) is still living at home, while their younger sister Ann (Kelly Thornton) observes the craziness of her family with wry detachment. Then Conor falls for sexy bad girl Raphina (Lucy Boynton), trying to impress her by telling her that he's in a rock band. So now he really needs to create one. He gathers some other outcasts at his new school, and they become Sing Street, trying to write some "futurist" songs. But finding their own sound is tricky.

As this scrappy band comes together, they take inspiration from the music around them, including pop bands like Duran Duran, The Cure and Spandau Ballet. Their own songs and clothing hilariously echo these styles as they try to find a way to connect with their audience while expressing themselves artistically. And the songs are fiendishly catchy, each accompanied by a hand-made music video that cleverly traces the boys' passion for music and their coming-of-age as artists in their own right, all within the context of the period. At the centre, Conor's journey is twisty, complex and hugely resonant. Walsh-Peelo is a very likeable actor who's thoroughly believable as a young guy trying desperately to act grown up, despite the terrible examples of his bickering parents and slacker brother.

Carney cleverly films all of this in period style, mixing the arch designs of the 1980s with the pointed comedy and drama between the characters. Basically, it's impossible not to smile all the way through this film. Each of these people feels like a fully fledged person with his or her own issues, which brings the entire movie to life, adding subtext and surprises. And instead of using the florid music, costumes and hairdos for gimmicky laughs, Carney is tracing the way these people grow up and find their own voice. He also subverts movie cliches at every turn, ending on a note that contains so much promise that you'll be hoping for a sequel.

Watch the trailer for Sing Street: