Even without a single word of spoken dialogue, this film has more charm and energy than most Hollywood blockbusters. But then the voice cast supplies all manner of moans, chuckles, grunts and sighs to let us know what the characters are thinking. And it's great to see this beloved TV character, spun-off from one of Aardman Animation's Wallace & Gromit shorts, back on the big screen where he belongs. 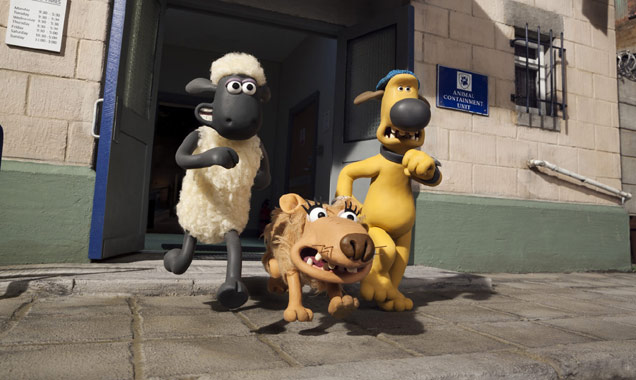 It opens on the rural farm where Shaun (vocalised by Justin Fletcher) is getting tired of the daily routine with his flock, their scatterbrained Farmer and sly sheepdog Blitzer (both voiced by John Sparkes). So one morning Shaun gets the idea to take a day off, plotting a sheepish revolution that goes wildly wrong when the Farmer ends up with amnesia wandering the streets of the nearby Big City. So now the sheep and Blitzer need to stage an elaborate rescue, all while staying out of the clutches of tenacious animal control officer Trumper (Omid Djalili). And as the Farmer has his own hair-raising adventure, his animals need to team up with an ugly stray puppy (Tim Hands) to save the day.

It's amazing how much personality each of these characters has, with noises perfectly complimenting the expressive animation. Since it's actually shot with clay and wool models, everything has a hand-made look that makes the film feel like it's set in the real world, rather than some digitally-rendered fantasy. And Shaun is a terrific hero, a hilariously strong-willed sheep who is fiercely loyal to his flock and always has an idea to get them out of the next mess. Each of the film's set-pieces is impeccably staged, packed with witty touches that will keep the adults chuckling at things the kids won't see until they watch it again. And again.

The lack of spoken dialogue sometimes makes things feel a bit simple and over-cute, but there's so much wacky detail that it's impossible to get bored. Even minor side characters are packed with amusing touches, like the three cheeky pigs who decide to throw a raucous house party during all of this. So although the meandering plot is utterly ridiculous, the filmmakers still manage to build some surprising chemistry and a real sense of suspense. Sure, we know how it has to end, but it's all so nutty that we never have a clue how they'll get there. And the sheer level of audacious imagination on-screen will guarantee that this becomes a timeless classic.