Set up as an old-style disaster movie with only a fraction of the plot, this earthquake action adventure is preposterous enough to just about work as a guilty pleasure. Everything else about the film is simply absurd, from the fake science to the simplistic family dynamic that strains to hold the story together. But it's definitely a big-screen spectacle, and Dwayne Johnson was made to fill the big screen. 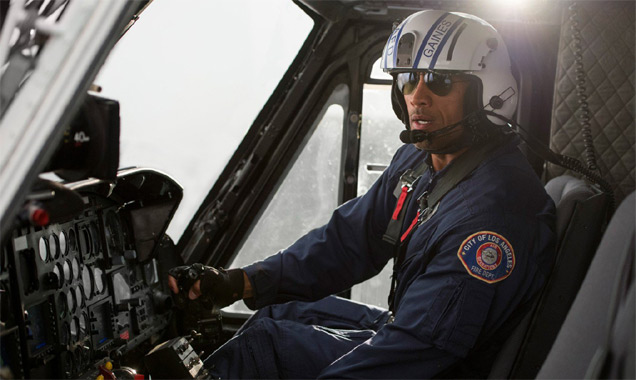 He plays Los Angeles Fire & Rescue chopper pilot Ray, who is going through a divorce from Emma (Carla Gugino) after the death of his young daughter. Now his older daughter Blake (Alexandra Daddario) needs help moving up the coast, but Ray has been called to respond to a freak quake in Nevada. So she travels instead to San Francisco with her mother's millionaire boyfriend (Ioan Gruffudd). Then jittery Cal Tech scientist Lawrence (Paul Giamatti) works out that this temblor is heading for L.A. and will move up the coast to San Francisco, perhaps creating the biggest seismic event the world has ever seen. As he issues urgent warnings, Ray rescues Emma from a collapsing L.A. skyscraper, and they both head north to save their daughter. Meanwhile, Blake has teamed up with sexy Brit Ben (Hugo Johnstone-Burt) and his perky little brother Ollie (Art Parkinson) to survive the chaos in San Francisco.

Despite the filmmakers' stated goal to recreate a classic disaster epic like The Poseidon Adventure (1972) or Earthquake (1974), this film doesn't bother to feature an ensemble cast with complex intertwined storylines. Instead, it heaps all of the drama onto Johnson's beefy shoulders. He has more than enough charisma to hold it together, even if his one big emotional scene feels a bit, well, stony. Everyone else provides a masterclass in panic-stricken acting, running and screaming and fearing for everyone's lives even though it's clear from the start that very few characters will die. Hundreds of thousands of anonymous digitally rendered victims perish, but the movie doesn't bat an eyelid about them.

Virtually every scene is awash with digital effects, which make the entire film feel utterly implausible. From the various physics-defying helicopter stunts to buildings that fall like dominos, there's the sense that a 10-year-old would know more about science than these filmmakers. Even a child understands that a tsunami moves away from the epicentre of an earthquake, but that wouldn't be nearly as fun as the outrageously staged tidal wave sequence here, which combines so many harrowingly silly coincidences into one split second that you almost want to applaud the movie's audacity. Yes, everything about this feels artificial. Including the excitement we feel watching it.