Marion Cotillard delivers another raw, devastating performance in this beautifully made drama about two badly damaged people who adapt to a new life together. After 2009's award-winning A Prophet, director-cowriter Audiard delivers an equally complex but strikingly different film, centring on complex, conflicting emotions and characters who are so messy that they feel jarringly real. 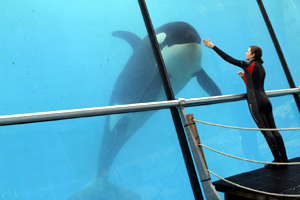 It starts in Belgium, as Alain (Schoenaerts) takes his 5-year-old son Sam (Verdure) and moves to the French Riviera to live with his sister (Masiero) and her husband (Correia). With his burly physique, he easily finds work as a nightclub bouncer, and one night he meets the sexy Stephanie (Cotillard), who trains orcas at a local aquarium. Then she has a terrible accident at work that leaves her disabled, and their unlikely friendship begins to develop in unexpected ways. He seems uniquely able to see past her physical issues, while she begins to understand his deep desire to be a bare-knuckle fighter. But neither has the skills to help heal each others' emotional scars.

In more obvious filmmakers' hands, this would be a heartwarming tale of two lost souls falling in love and giving each other hope. But Audiard resists sentimentality at every turn, never giving into romantic cliches while packing the story with scenes that catch us off guard simply because they are so startlingly unlike normal movie plot points. Alain and Stephanie don't so much help each other as provide a safe space in which to recover. And along the way, Audiard explores them like rust and bone, broken down by years of decay and injury. But of course, bone sometimes heals to be stronger than it was before.

The script is cleverly understated, constantly catching us off guard and forcing us to think about each scene while Audiard's cameras refuse to flinch away from the difficult moments. Both Cotillard and Schoenaerts manage to be both likeable and prickly, transparently revealing their characters through both physicality and emotion. And it's stunningly shot and scored too, with a very clever use of pop songs (we'll never hear Katy Perry's Firework in quite the same way again). And in the end, the film leaves us both exhilarated and shaken to the core.