For a low-budget kids' movie, this British science-fiction adventure has an unusually sharp cast, decent effects and an energetic pace that helps to distract from the rather flimsy premise. So even if the story never quite builds a solid head of momentum, it holds the attention due to a dark-edged tone and some entertaining action sequences that give the terrific young actors a chance to shine. 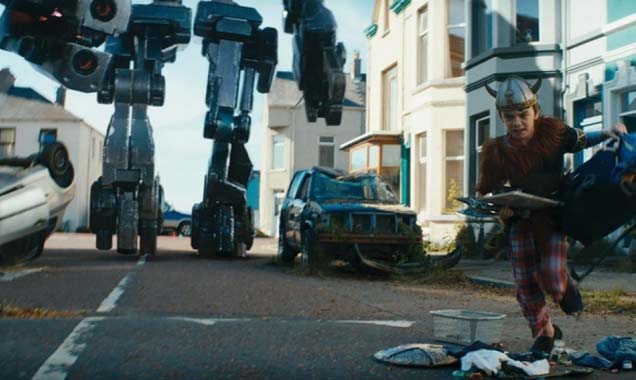 It's set three years after robots invaded Earth, won the war in 11 days and locked all humans in their homes, using human collaborators to enforce this rule. In a seaside English town, the head collaborator is Smythe (Ben Kingsley), who spends much of his time pursuing hot single mother Kate (Gillian Anderson) and tormenting her teenage son Sean (Callan McAuliffe). Kate has taken in three orphaned kids: teen siblings Alexandra and Nathan (Ella Hunt and James Tarpey) and 10-year-old Connor (Milo Parker). And together these four young people figure out a way to short circuit their monitoring implants so they can leave their home. Sean is sure that his father (Steven Mackintosh) didn't die in the war, so he enlists the other three to help find him. And their search gets a boost when they stumble across a group of anarchic rebel veterans living the wild life in an abandoned hotel.

This partying hideout is a nicely raucous touch, even if its pungent innuendo essentially rules young children out of the audience. But this kind of blackly comical touch is more than welcome in a movie that's otherwise rather childish and earnest. Another nice touch is how the human collaborators are called the Volunteer Corps and identify themselves with Nazi-style armbands. And the robots' human-shaped mediator (Craig Garner) looks like a freaky demon-child. All of this helps overcome the film's strong sentimental streak, as well as some production values that are more in line with Doctor Who than a big-screen alien blockbuster.

Even so, what's on-screen looks pretty cool, with detailed special effects that are understated and eerily realistic. So even if the plot is thoroughly predictable, it moves along briskly through a continuous series of action set-pieces that sometimes feel genuinely perilous. Best of all is the way director-cowriter Jon Wright keeps the focus tightly on the kids, making them feel like real children who discover themselves as they rise to the challenge of the situation. McAuliffe is particularly good at grounding Sean's big heroic moments in flickers of self-doubt that make him unusually engaging. He's definitely a young actor to keep an eye on.