Spanish filmmaker Plaza takes this franchise in yet another direction, surprising us with an inventive approach to the genre by twisting our expectations. While Rec 2 turned things darker and more vampirical, this third instalment does an about face into comedy. Naturally, it's dark, blood-soaked comedy. And it's also so inventive that it continually catches us off guard. 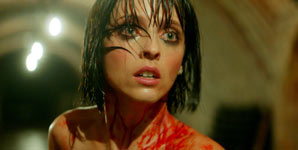 The film starts with a cheesy wedding video showing the romance and marriage of Clara and Koldo (Dolera and Martin), leading up to the reception in a beautiful garden hotel. Then guests start feeling queasy, infected by the gruesome virus of the previous films, which turns them into snarling, flesh-eating monsters.

And all hell breaks loose. From here, filmmaker Plaza abandons the found-footage genre, shooting things as a more standard horror romp as Clara and Koldo are separated and must try to find each other amid the carnage.

While this is indeed a terrifying scenario, packed with horrific violence and serious suspense, the script keeps us off balance with a continuous stream of black comedy. There's SpongeJohn (Gonzalez), because SpongeBob is copyrighted, entertaining the kids and then running for his life in his silly foam costume ("I'm naked in here!"). There's a professional videographer (Sr B) who takes his work a bit too seriously. There's a chapel full of medieval armour that comes in handy, even as the priest won't stop intoning about the unholy undead.

There are also mixed emotions when relatives are infected and killed, including some remarkably moving sequences. So as the nastiness escalates into full-on horror we are taken aback by laugh-out-loud hilarity as well as emotional resonance that actually brings a lump to the throat. It's such a bracingly original approach that it keeps us enjoyably off-balance, which is rather exhilarating for fans of grisly horror movies. And it also makes us wonder what Plaza and his cohort Jaume Balaguero (who only acted as creative producer this time) have up their sleeves for Part 4.