Reaching for the Moon

Reaching for the Moon Review

Based on a true story, this Brazilian drama has a lush authenticity as it tells a story that has strong historical relevance even as it sometimes slips into heightened melodrama. Filmmaker Bruno Barreto recreates the events with sensitivity, bringing the real people to life in complex, emotional ways. So while it's sometimes a bit tormented, it's also fascinating. 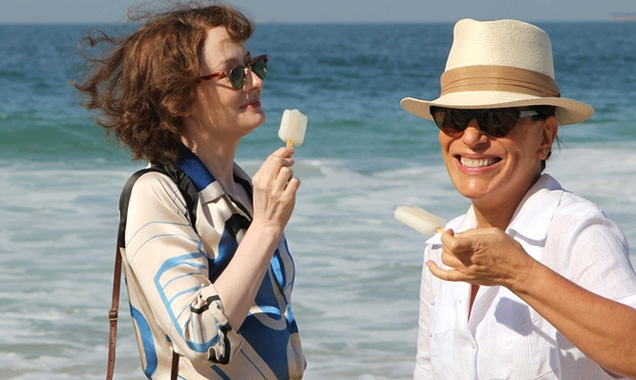 In 1951, American poet Elizabeth Bishop (Miranda Otto) leaves her boyfriend (Treat Williams) in New York to travel to Rio de Janeiro to visit her old university friend Mary (Tracy Middendorf) and her new girlfriend, the noted architect Lota de Macedo Soares (Gloria Pires). They live in idyllic splendour in Lota's country estate, where the painfully shy Elizabeth is pried out of her shell by an overt display of affection from Lota. When Mary gets jealous, Lota agrees to adopt a baby, as long as she can keep Elizabeth as well. So they create a rather tense family together, which is strained badly by emotions as the years go by. But they find common ground when they get involved in the election campaign of their politician friend Carlos Lacerda (Marcello Airoldi).

This three-way relationship is clearly never going to last, but these women give it a go. Lota's complete rejection of society's rules is intriguing as it leads to some of her more iconic design work, but her Latina temperament also gets the best of her as she can't bear to let Elizabeth out of her sight. Intriguingly, the script reflects but never exaggerates repressed 1950s and 60s attitudes, layering in all kinds of dark meaning between every line of dialogue. Which makes every scene feel rather gloomy.

The cast is terrific at bringing out the brittle connections between these women. Otto and Pires are like flip sides of a coin, both passionate but in very different ways, while Middendorf hovers around them waiting to pounce. And Barreto beautifully captures their personalities in the context of the stunning natural beauty around them as well as the tumultuous politics that still echo in Brazil today. The problem is that both Elizabeth's and Lota's true passion is art, which can't help but leave their relationship feeling a bit cold.