This dark thriller is so relentlessly stylish that it's distracting. Refusing to settle down to focus on its intriguing central story, filmmaker Greg Francis whirls around through a series of whizzy flashbacks that layer in all kinds of subtext and interest. But it's so fragmented that the film never quite builds any suspense, instead becoming a grotesque horror movie featuring a slasher who tortures and kills with Saw-like maniacal glee. 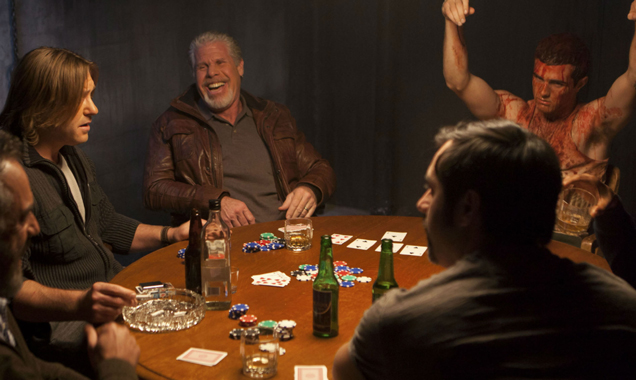 It centres on young rookie Detective Jeter (Beau Mirchoff), whose recent bust has elevated him to the ranks of the elite cops (Ron Perlman, Titus Welliver, Giancarlo Esposito, Ron Eldard and Corey Large) who meet for a weekly poker game. At his first night with them, each recounts his most iconic case, and afterwards Jeter staggers out a bit tipsy, running into his underaged girlfriend Amy (Halston Sage) who is being menaced by a man (Michael Eklund) in a terrifying mask. Next thing Jeter knows, he's drugged, tied up and being held by this self-proclaimed paedophile who clearly has some sort of agenda here. Jeter can hear Amy in the next room, but every time he tries to escape their captor seems to be one step ahead of him.

All of this plays out of sequence, constantly interrupted by the other five cops' stories and even the masked man's own past, all played out in with flashy visuals and a clever integration of Jeter into past events as he watches them unfold. Sometimes the film also goes into his mind as he plays out a scene hypothetically. All of these fragments weave into the central story in some way, but filmmaker Francis never quite brings it into any sense of focus. It's so hyperactive that all the audience can do is sit back and enjoy the inventive visuals and up-for-it cast, while being horrified and/or entertained by the brutal violence.

While the actors all play their characters full-tilt, there isn't much to them really. Only Mirchoff's Jeter has any sense of subtext about him, letting the audience into his troubled mind as he tries to work out why he's in this predicament. Indeed, watching him try to get into the head of the killer so he can solve the crime is fascinating. But while the film's set-up is strong, with plenty of black humour and high-energy interaction, it ultimately becomes clear that the intention is to gross out the audience more than anything else. And without more connection to the characters, the escalating nastiness feels like a gimmick rather than part of a story.