Movies don't get much more meta than this: a film about a screenwriter worried about writing a rom-com script because he's never been in love, even as he falls for someone. It's a snappy, smart script, but it's also completely overwritten, as every line feels like it's been carefully crafted to be absolutely hilarious. Thankfully, the cast adds some charm to the screen, and the genuinely witty script keeps the audience chuckling. 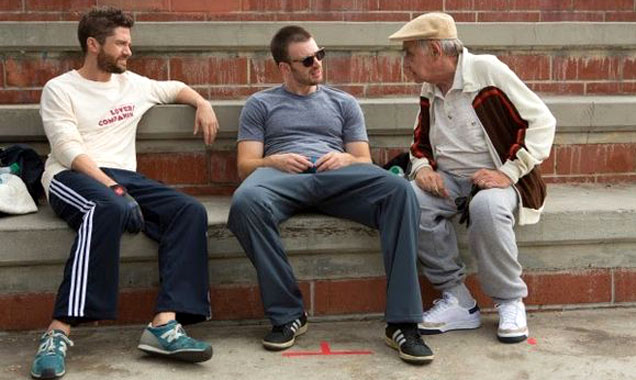 The screenwriter (Chris Evans) never has a name, nor does the woman (Michelle Monaghan) he meets at a charity event, then frets about because she has a boyfriend (Ioan Gruffudd). For help, he turns to his best friend Scott (Topher Grace) and their sardonic writer pals (Aubrey Plaza, Luke Wilson and Martin Starr), but each of them has his or her own issues. So our hero pursues this woman, who shares his cynical view of romance and enjoys hanging out with him even though falling in love is out of the question. And for a guy who has refused to let himself love anyone since his mother abandoned him when he was 8, maybe it's time he gives it a try.

Evans and Monaghan bring a lot of spark to their roles, including some real chemistry, although their characters are somewhat muddled by having them also appear in a continual stream of flashbacks, historical scenes, fantasies and stories told by anyone on-screen. Evans is also required to deliver a nonstop postmodern voiceover that adds yet another layer to the wackiness. All of these rather smug gimmicks are very well done but seem desperate to distract us from the fact that the film's plot is deliberately strung together from every romantic comedy ever made. And of course, that's precisely the point in a film that's constantly winking at us.

Director Justin Reardon packs the screen with wildly inventive visuals and allows the supporting cast to shamelessly add quirks to their characters in an attempt to steal every scene. At least Grace puts a nice spin on the standard gay best friend. So while it's consistently funny, it's so busy that the plot seems to drag, and the presence of so many hackneyed rom-com touches makes it feel oddly derivative. So the best stuff gets lost in the shuffle, including an intriguing observation about how you'll never find your soulmate if you can't face the truth about yourself. And how it always feels that everyone else finds love so much easier than you do.