This hugely enjoyable adventure is a loose remake of the 1977 Disney hit that blended cartoon and live-action. By contrast, this movie feels almost unnervingly realistic, with seamless effects that bring a gigantic green furry dragon remarkably to life. With strong characters and a pointed story, this is a great movie for kids. And grown-ups might find themselves getting caught up in it as well.

Six years after being lost following a car crash, 12-year-old Pete (Oakes Fegley) is still living in the deep forest, playing happily with his dragon companion Elliot, who's like an enormous cuddly green puppy dog. But sawmill worker Gavin (Karl Urban) is travelling deeper into the woods. His brother, the mill's owner Jack (Wes Bentley), is urging caution, perhaps because his fiancee is the park ranger Grace (Bryce Dallas Howard). Then one day on the work site, Grace spots Pete in the trees and brings him back to civilisation. No one believes his fanciful tales of life with a dragon, just like they didn't believe Grace's father (Robert Redford) decades ago. But Grace's sparky daughter Natalie (Oona Laurence) does. And she decides to help Pete get home.

What follows is a fairly low-key adventure, as various factors come into play, mixing threats against this primordial forest with threats against Pete's bond with Elliot. It's a simple structure that immediately resonates with the audience, mainly because director-cowriter David Lowery keeps everything within the realm of believability. And the actors deliver similarly authentic performances as people trying to grapple with a rather startling discovery. Urban has the most thankless role in this sense: the hothead who immediately makes all the wrong decisions for selfish reasons. But he brings some complexity where he can. And he's nicely balanced by Howard, Bentley and a seriously twinkly Redford. Meanwhile, both Fegley and Laurence deliver solid turns as believably resilient kids.

There are moments when Lowery seems to undersell the story (the opening car crash is so oblique that children might not immediately grasp that Pete's parents have died). And sometimes the sense of wonder is a bit overpowering. But other scenes are exhilarating, including a terrific climax that builds to an explosion of genuine peril. The earthy special effects never draw attention to themselves, leaving us to enjoy the growing relationships. So in the end, this is a riveting story that reminds us how important it is to keep our minds open to the wonders of the world around us.

Watch the trailer for Pete's Dragon: 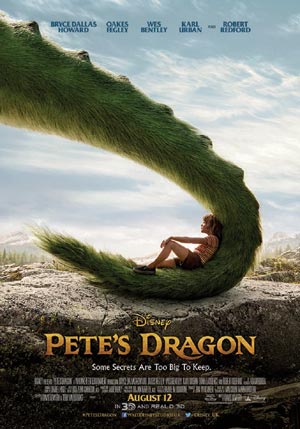