After Love and Faith, Austrian filmmaker Ulrich Seidl takes a gentler approach to explore hope, although the film is equally unsettling. This is an inventive look at the conflicting desires and aspirations of teens and adults, and as it dips into areas that are deeply inappropriate, it turns memorably provocative. 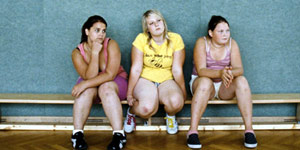 While her mother is in Kenya on holiday (see Love), Melli (Lenz) is staying with her religious aunt (see Faith), who sends her to a summer diet camp for overweight teens. The fitness programme is run by a disciplinarian coach (Thomas) and strict nutritionist (Bartsch) who put the kids through their paces. But it's the camp's middle-aged doctor (Lorenz) who catches Melli's attention. As he monitors her health, she starts to flirt with him. And he flirts back. She's encouraged to keep going by her new friend Verena (Lehbauer), who's much more experienced with men and helps Melli sneak out for a trip to a local bar to meet a few more.

Seidl's filmmaking approach is observational rather than plot-driven. And watching this awkward interaction is often very funny, although we feel a bit guilty about laughing at it. Especially as the film quietly and astutely explores the characters' deep yearning for connection with other people, including of course the potent curiosity every adolescent feels about sex. It's hardly surprising that these kids have secret drunken parties, play spin the bottle and raid the kitchen for midnight snacks.

But the adults are just as interesting to watch, as each has his or her own hopes and expectations. The doctor is such a bundle of conflicting urges that it's just as painful when he resists temptation as when he gives into it. All of the acting is so natural that we are forced to put ourselves into even the most squirm-inducing situations. And there are several points that really strike a nerve, such as how Verena describes the camp in very different ways to her divorced parents. Or how the kids reluctantly go along with all of the camp activities, including the supposedly motivational sing-song: "If you're happy and you know it, clap your fat!"