After setting the scene with vivid characters and some insightful interaction, the plot of this teen comedy-drama feels like a let down. It's an inventive twist on the usual high school movie, and it has a darkly realistic tone, but where the story goes is rather pushy and melodramatic, straining for a sentimental surge of emotion. It's very well made, and the cast is excellent, but the film is ultimately rather forgettable. 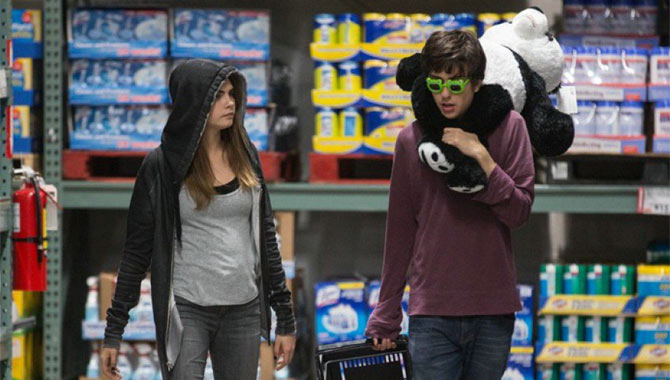 It's set in small-town Florida, where 18-year-old Quentin (Nat Wolff) is trying to focus on graduating and heading to university. He has had a crush on his neighbour Margot (Cara Delevingne) since they were children, but they've drifted apart as she fell in with the rebellious kids. Then one night she appears asking for his help to get even with her cheating boyfriend (Griffin Freeman), giving Quentin the night of his life as they stage a series of pranks. The next day Margot vanishes, leaving enigmatic clues about where she's gone. So Quentin enlists his pals Ben and Radar (Austin Abrams and Justice Smith) to help him find her, and they end up taking a road trip with Margot's best pal Lacey (Halston Sage) and Radar's girlfriend Angela (Jaz Sinclair), following her trail to a blip on a map of rural New York.

The title refers to fictional towns cartographers put on maps to alert them to plagiarists, a metaphor that never quite rings true but adds to the overall mystery. More interesting is the way the story puts a fresh spin on the usual teen-movie themes: peer pressure, wild parties, loss of virginity, the prom, plans for the future. These things are grappled with using a superb mix of humour and angst, giving the cast some very strong scenes along the way. Wolff anchors the film as a late-bloomer who's only just discovering himself, and Delevingne brings a wild allure to her role, even though everything Margot does feels somewhat contrived, which makes her feel like a romanticised memory.

As things develop, the most engaging relationship in the film is between the three pals, and Wolff, Abrams and Smith generate a superb sense of camaraderie that carries the audience through the rather clunky final act (the very last scene is simply impossible if you've been paying attention). So even if we never quite believe that the story would actually play out anything like this, the characters are strong enough to hold our attention, and director Jake Schreier (Robot & Frank) keeps the tone grounded and honest enough to make us care. Although the final little sermon about "what I've learned" feels painfully obvious.