No One Lives Review

Clearly designed to be as grisly as humanly possible, this movie combines a brutal central character with a very flimsy premise. And the result is actually rather good fun simply because it's so over-the-top. While happily indulging in every gross-out cliche they can think of, the filmmakers may play it far too straight but they also give horror fans exactly what they want. 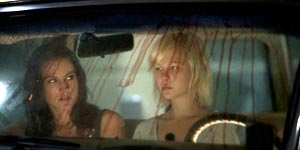 There's even the hint of a back-story, as an unnamed man (Evans) drives through the American Northwest with his reluctant girlfriend (Ramsey), who is furious over an affair he had. When they stop in a small town for the night, the televisions are full of stories about the hunt for kidnapped heiress Emma (Clemens). And they inadvertently become the target for a gang of violent burglars (Tergesen, Magyar, Olivo, Knapp and Clay) who have just killed an entire family. But the driver isn't a man to mess with, and when the thugs discover Emma hidden in his car, she warns them that he's a psychopathic maniac who won't leave any of them alive.

From here the movie essentially becomes an extreme slasher horror from the killer's perspective, as director Kitamura merrily indulges in the most grotesque torture and carnage he can think of. And it's so bloodthirsty that we can hardly stifle our laughter. There's also a level of soapy psychological tension to go along with the physical nastiness, which gives the actors something to work with. Evans prowls through each scene with unblinking ferocity, deploying whatever he finds on the gang's farm (oh look, a wood-chipper!). Meanwhile, the goons reply by having a vicious power struggle between Tergeson's cool-headed leader and Magyar's trigger-happy meathead.

There isn't a moment of subtlety in the entire film. Even Clemens' shell-shocked performance is packed with eerie pronouncements and wild-eyed staring. At its core, the story seems to be teaching us that if we want to plan a crime, we'd better think it through properly. At one point, Evans even growls, "You know what I hate about the modern criminal? They're so mediocre!" For him there are so many more options than merely aiming a big gun at his next target. And fortunately it's obvious that we shouldn't take anything in this movie seriously, because otherwise that's a pretty frightening message for the kids.