This documentary about the worst World Cup competitors in history is much more than a football movie: it's an engaging and hugely uplifting exploration of people with real passion for their community. As these underdogs try to break out of their losing rut, we want to stand on the sidelines and cheer them on. Or run out on the pitch and play alongside them. 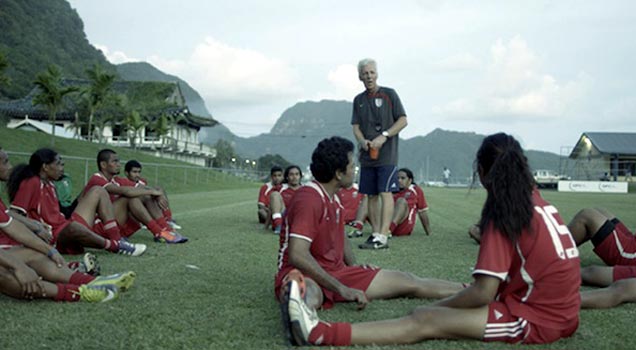 American Samoa's national football team holds the world record for the most brutal defeat in World Cup qualifying, losing 31-0 to Australia. Refusing to give up hope, they enter the South Pacific Games, where their losing streak remains unbroken. Indeed, they've never even scored in a qualifying match. So the bosses decide to bring in an outsider to coach them: Dutch manager Thomas Rongen. They also bring in some Samoans living in the USA (Ramin Ott and Rawlston Masaniai) and call back star goalkeeper Nicky Salapu, who has moved to Seattle and returns home to hopefully salvage some dignity after that brutal loss to Australia.

Filmmakers Mike Brett and Steve Jamison not only capture Samoa's raw beauty and lively culture, but they discover vivid characters in these teammates. Rongen has a remarkably involving back-story of his own, and it's moving to see him soften his hard-line approach to coaching as he is adopted as an islander. Salapu and other off-island players all have their own reasons for wanting to honour the tiny nation they call home. And the film's scene-stealer is colourful cross-dresser Jaiyah Saelua, the first intersex person to play in a World Cup match. Officially classified as a fa-afafine, neither male nor female, Jaiyah is a valued member of society and the team.

The film is beautifully shot and edited, with a strong focus on the people rather than the big issues their story raises. This makes it a remarkably intimate look at Polynesian culture, drawing out the close-knit relationships, deep religious views and the society's embracing nature (a flashback to home-movies and international coverage of the 2009 tsunami is deeply moving). It also makes the pivotal matches seriously nail-biting, as we long for the team to break away from the bottom of the rankings.